Which U.S. housing market is the most expensive?

It seems like the question should have a single, straightforward answer. But with varying definitions of what constitutes a housing market and with different ways of measuring home value, the question is not so clear cut.

Using data from Zillow, this 3D map shows the cost of housing by U.S. county. The height of each area represents the average price per square foot of its homes.

To navigate around the map with a mouse:

Three light colored areas stand out clearly above the rest. The one in the middle is Aspen (Pitkin County). The other two should come as no surprise: New York City and San Francisco.

If you search around online, chances are most reports you find will rank San Francisco as the city with the most expensive homes, followed by New York. And Zillow’s data agrees. The $878 average price per square foot in San Francisco is far higher than New York City’s $422. But that comparison is based on the cities’ arbitrarily-defined boundaries, not exactly an apples-to-apples comparison. New York covers a much larger area than San Francisco and its population is 10x larger (8 million vs 800k).

If instead of looking at San Francisco, you compare New York City to the Bay Area, which has roughly the same population, the comparison becomes more interesting.

The highest point in the map is clearly the tall white spike in the east: Manhattan (New York County), where the average price per square foot is $1,397. But the housing values fall off sharply as you move to the outer boroughs. Across the river in Brooklyn (Kings County), the second most costly area of NYC, the price per square foot is only about a third of what it is in Manhattan.

In contrast, the Bay Area appears as a large block of yellow. The price per square foot in San Francisco (the highest yellow point in the west) doesn’t match Manhattan, but as you move into the neighboring counties of San Mateo / Santa Clara / Marin, the cost of housing is only marginally lower. 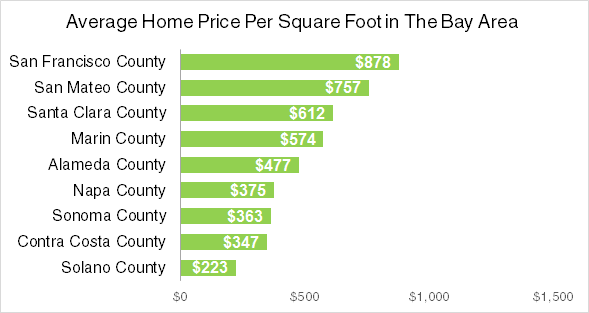 So, which area has the more expensive real estate? It seems, the unsatisfying answer is: it depends.

If you’re looking to buy a home in the city center, you’re likely to get more for your money in the Bay Area. Manhattan is substantially more expensive per square foot than San Francisco. 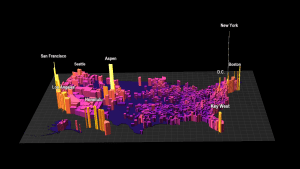 Edit: Previously, the prices per square foot shown in the map were those of recent home sales. They have been updated to instead reflect the ZHVI Median Home Values.

My latest project, Blueshift, is an easy-to-use tool for creating dynamic maps, like the one in this post. If you’d like to give Blueshift a try, you can find more information here.