Home » Economy » A Visual History of Gender and Employment

This graphic is not meant to represent a view on the wage gap debate, it is just a presentation of the data and does not account for the underlying factors that explain these differences. However, I did add a few comments at the bottom in response to anyone who questions whether the gender gap exists.

The animated graphic below shows how gender differences in the workplace have evolved over time, both in terms of employment and wages.

Each bubble in the chart represents a specific occupation. Based on its placement, you can see the percentage of the labor force that is female (horizontal axis) and the average wages earned by women as a percentage of those earned by men (vertical axis).

Press play to start the animation.

Update Mar-2016: I have updated the graphic to include 2014 data, the latest release from the U.S. Census.

Gender Differences in the Workplace for Select Occupations (1960-2014)

View this graphic as an Animated GIF / Youtube video

It wasn’t the current figures I thought were interesting as much as the changes over time.

In 1960, the wages of female financial service workers and truck drivers were about 55% of men’s. Today, that number has increased to nearly 80% for truck drivers, but women in finance still earn the same 55% relative to men.

Some occupations even “switched genders.” In 1960 only 15% of accountants were women. Today, there are more women accountants than men. Likewise, cook went from being a mostly female job to one that is mostly men.

Right from the start, I was struck by how polarized the occupations were in 1960, as if everything was either a clearly “man job” or a “woman job” with very little in between. 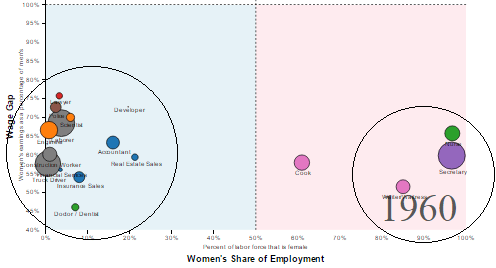 And from there things seem to proceed in phases, the first phase being a movement toward the center (i.e. the occupations become less gender specific).

The image below is from almost 20 years later. Those male-dominated occupations that were on the left have a lot more female workers, but the overall wage gap has hardly changed. 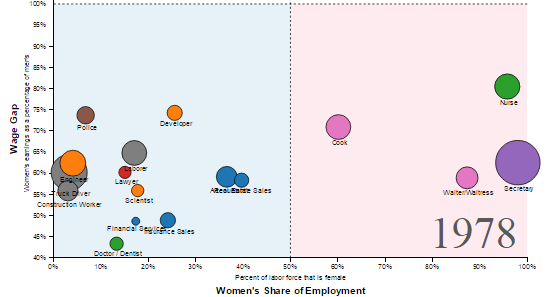 Next, the trend takes a 90 degree turn. The labor force remains more or less the same, but the wage gap gets smaller as the bubbles move upward. 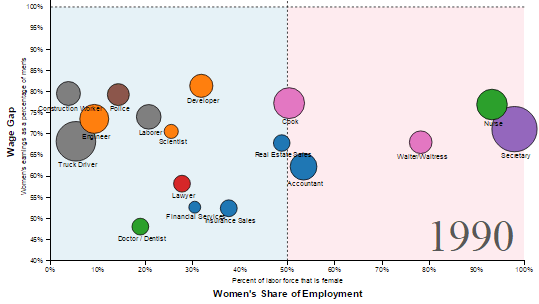 From there, the wage gap continues to close, but the pace starts slowing down… 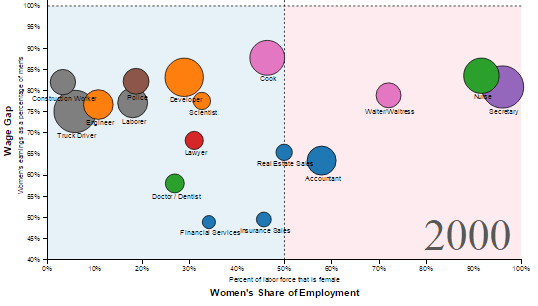 … and eventually levels out. Here, another 13 years later, things look more or less the same. 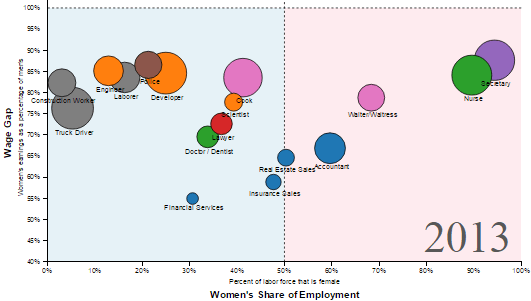 The chart below shows the big picture, wages and employment over time for all occupations combined. 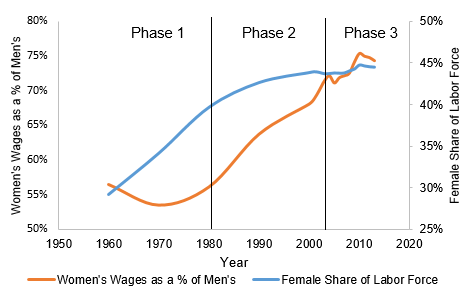 Here is 2013 again, but with bubble size set to represent wages rather than employment. 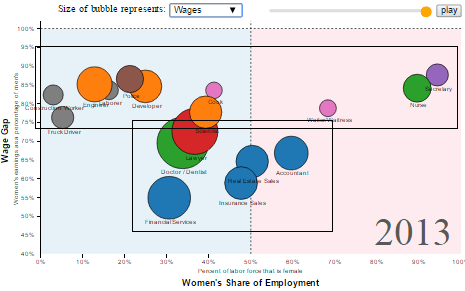 As in 1960, occupations in 2013 also seem to fit into one of two distinct categories, shown in the “T” formation above.

First are the occupations where women still earn much less than men: doctors, lawyers, and several business-related professions. These occupations also happen to be the ones with the highest wages, and oddly they seem to have the most gender-balanced labor forces.

The second group are the occupations in the top bar of the “T”, which are more gender-specific, have lower wages, but with more equality in pay.

For this debate, employment data alone does not make a conclusive argument either way because it only shows the outcomes, not the causes. So, I do agree the 78% number that everyone quotes is basically meaningless, since much of it can be explained by differences in occupation, education, etc.

To pinpoint the causes, you really need a randomized experiment. Fortunately, there have been many of them, which show overwhelmingly that there is indeed gender bias in the workplace.