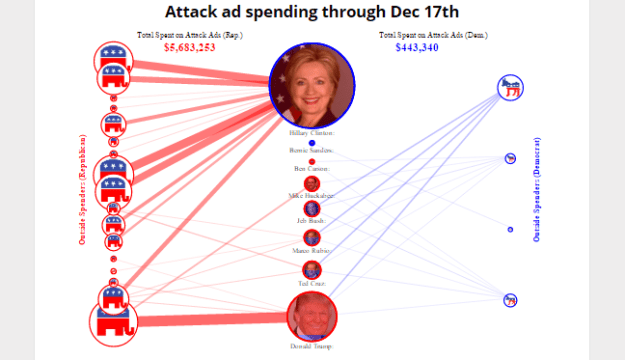 A few months ago, I posted an analysis of how the 2016 presidential campaigns were spending their money, based on disclosures to made the Federal Election Committee. These disclosure reports offer a fascinating glimpse into the strategies of each campaign. However, they are published only once per quarter, so much of the information is stale by the time the FEC makes it available.

But, one distinguishing feature of this election cycle is the rise of spending by outside parties. Thanks to the Citizens United Supreme Court decision, super PACs and other organizations / individuals not affiliated with the official campaigns have spent nearly 14 times more in this election compared to the same point in 2011. And unlike official campaign expenses, outside parties are required to disclose their spending in real time.

What do outside parties buy with this money?

Primarily advertising and other media, either supporting or opposing a particular candidate. To their credit, outside spenders in this election have so far put most of their money toward positive promotions. Of the $101 million they’ve spent, only $6 million went toward negative ads. However, the negative ads tell a more interesting story.

The visualization below shows a summary this election’s spending on negative ads: who is paying for them and against which candidates. Press the start button to see the progression since April.

Breaking the data down by political party, of the spender and of the targeted candidate, the graphic below shows the totals.

On negative advertising, conservative outside parties have outspend liberals $5,683,253 vs $443,340, with a large portion of that spending targeting other conservatives.

And here is the same graphic, looking only at the spending since the beginning of September. 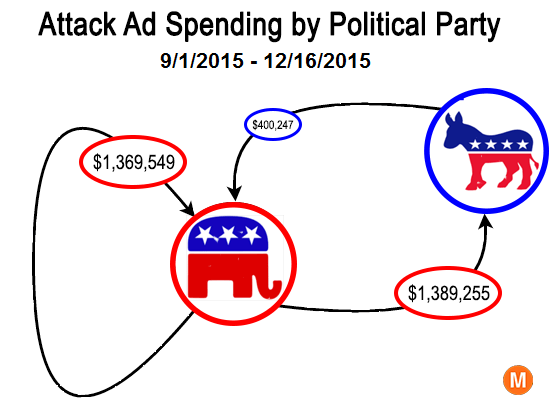 This may not be surprising, since the Republican primary is a tight race with several viable candidates, whereas the Democrat’s candidate has in effect already been chosen. But the spending does highlight the ideological divide occurring within the Republican party, a divide embodied by Donald Trump. 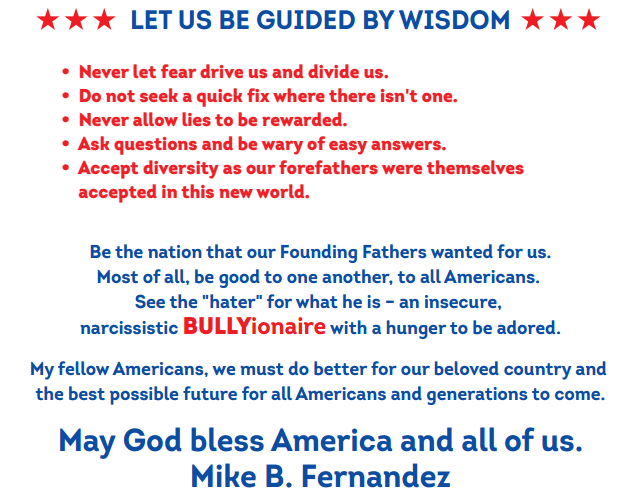 If you would like to keep tabs on where the outside money is going in this election, you can find the information on the FEC website, updated daily.