Home » Transportation » Visualizing the pulse of London, NYC and Berlin through the journeys of shared bikes 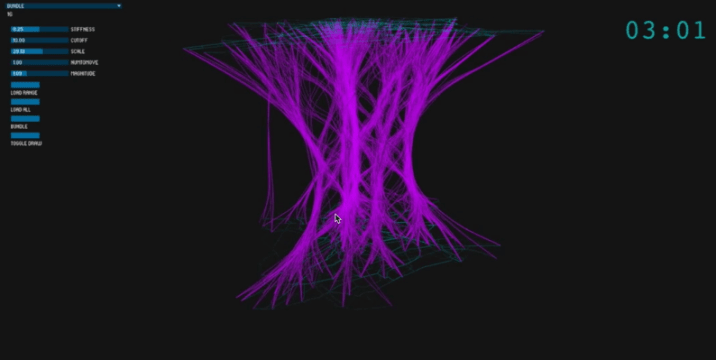 Researchers in Germany have turned GPS data from three major world bike share programs into living, breathing visualizations of the cities themselves.

Bike sharing programs have grown from just 24 cities worldwide a decade ago to more than 800 cities today, but how has a 200-year-old device suddenly become the next big thing in urban transport? The key is digital information, the real-time GPS technology that allows the bikes to be tracked and secured, and lets cities monitor how and where they are being used.

Some cities have also begun posting this GPS data online, allowing the public to come up with their own innovative uses. One fascinating example comes by way of two visual design researchers in Potsdam, Germany: Till Nagel and Christopher Pietsch have used bike sharing GPS data from three global cities to create living, breathing portraits of the cities themselves.

As soon as you compare these cities’ patterns of movement, several distinguishing features become apparent. As noted on the project’s website, some visitors pointed out the barrier between Middle Manhattan and Central Park, as well as the inner-city area in Berlin. Others noted the contrast between New York’s neatly ordered street grid and the idiosyncratic, organically-grown layouts of Berlin and London.

The bike trajectories are visualized as colored droplets flowing through the street grid, popping in and out of existence from one bike station to another. Visitors can view each city’s bike journeys at three different levels:

The most obvious difference between the cities is the vastly different number of bike sharing trips in Berlin as compared to London and New York City – whose bike sharing systems are comparable in size, each with about 35,000 trips represented in the animation.

In contrast, Berlin’s bike sharing trips number less than 2,000. As explained on the cf. city flows website: “While cycling indeed is more common in Berlin than in London, Berlin’s bike-sharing scheme is mostly used for tourist and leisure activities, as most riders have their own bikes.”

Exploring the complex ‘edge bundling’ methodology behind the interactive

Perhaps the most impressive aspect of cf. city flows is the technical work that went into its planning and design. To get a sense of the complexity involved in condensing tens of thousands of disparate bike journeys into simple, coherent patterns, see the video above. It covers the creators’ use of edge bundling, just one of many complex methods used in the project’s exploratory design process to find and highlight patterns in the data.

You can find more information about the installation, the methodology, and even the origin of the cf. city flows name on the project’s website.