Last month the Atlantic highlighted one of the most shocking stats I had ever seen.

It’s hard to put that number into context, but as the article points out,

It is also more than the combined amount Americans spend on sports tickets, books, video games, movies, and music.

Mouse over the map below to see where each state ranks in lotto sale per household.

The Atlantic also points to several studies suggesting that this $70.1 spend comes disproportionately from the poor.

That got me to thinking. The lottery is a source of state government funding, much like taxes. Viewing it as a tax, how does the lottery compare to other taxes paid by low income households?

According to the Bureau of Labor Statistics and the Institute on Taxation & Economic Policy, here are what different income groups pay in various taxes, as a percentage of before-tax income.

Property and sales taxes are regressive and are the largest taxes paid by the low income groups. Income tax rates at the low end are negative. That is because the amount received via tax credits often exceeds tax liabilities.

For the two lowest income groups, here are these same figures in terms of the actual amount paid. 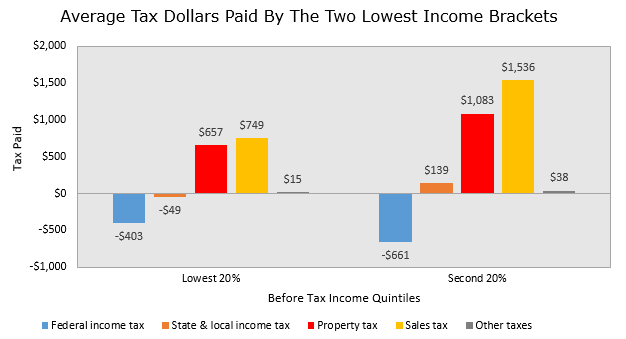 Who pays the lotto?

According to the National Association of State and Provincial Lotteries,

Numerous studies conducted in a wide range of jurisdictions show that frequent or “heavy” lottery players closely resemble the overall population of that state or province.

The NASPL website lists several studies and surveys supporting this opinion. However, there are several other studies that conclude the lottery is indeed disproportionately played by the poor.

I am not an expert on the matter, and there seems to be wide disagreement here anyway. So I cannot estimate these figures with any sort of realistic accuracy. But just for fun, lets take one study, make a few assumptions, and see what comes out.

These figures come from a 2010 study on gambling habits. The income of the households was not known, so the researchers determined socioeconomic status as “a composite measure of education and occupational prestige, equally weighted.”

Taking this socioeconomic status as a substitute for income (not exact, but not completely off the mark), and assuming the amount spent on the lottery is proportional to the number of days played, here is how the numbers come out.

The “lotto tax” vs other taxes 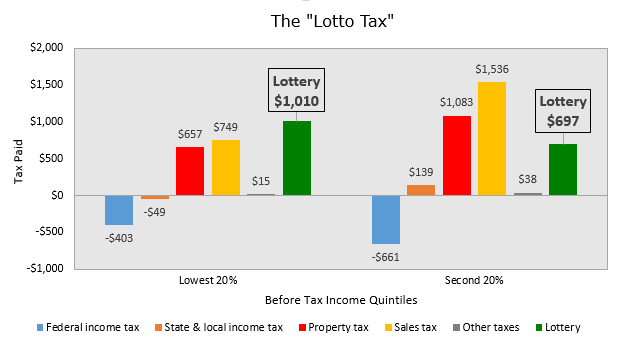 Based on these assumptions, the “lottery tax” is the single biggest tax paid by low income households.

Even if you take the conservative assumption that lotto sales are equal across income groups, that still comes out to $566 spent on the lottery per household.

In other words, you only have to assume low-income households spend slightly (32%) more than the average, and the lotto becomes bigger than any single tax they pay.