Home » Science » Setting the Record Straight on Fracking and Earthquakes

Last year the U.S. Geological Survey released a flurry of reports on the topic of human-induced earthquakes. It is now clear there is a connection between oil/gas extraction and earthquake activity. However, the nature of that connection has been widely misunderstood and misreported, even by some of the most reputable publications in the world.

1. Human-induced earthquakes are not a new concept

The science of how human activity induces earthquakes is complex and still not fully understood. But the fact that we are inducing earthquakes has been known for a long time.

Specifically, the connection between oil/gas extraction and earthquakes has been generally accepted since at least the 1960’s and plainly obvious for about the last decade. Although some politicians may still question the connection, I was building natural disaster models during that time and can say with confidence that science does not.

If there was any question remaining, the recent case of Oklahoma should remove all doubt.

To demonstrate, here are all of Oklahoma’s injection wells, each one sized proportionally to its annual injection volume. 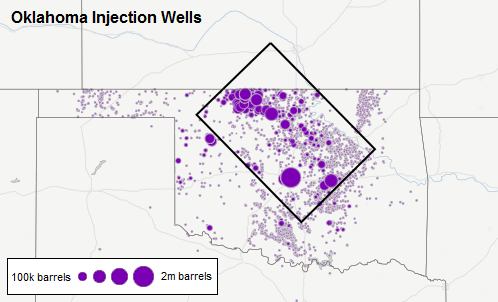 As the map shows, most of the activity is concentrated in the northern central part of the state, more or less the region inside the box.

This next map shows all U.S. earthquakes of magnitude 3 or greater since 2010. The box over Oklahoma is the same region shown in the map above.

All earthquakes of magnitude 3 or greater since 2010, as reported by the U.S. Geological Survey

In case the map does not make the point clearly enough, here is a chart showing the growth of Oklahoma earthquakes in numbers. 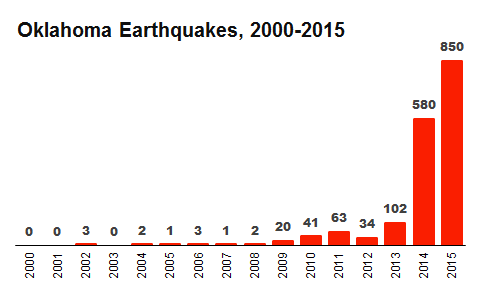 Oklahoma is the latest and clearest example demonstrating the connection between oil/gas extraction and earthquakes. And along with a few other recent examples of human-induced earthquakes in the central U.S., it has helped science to gain a better understanding of how and why they occur.

Only last year did the U.S. Geological Survey feel they understood the phenomenon well enough to incorporate it into their hazard estimation model. It is this new understanding (how and why oil and gas extraction induces earthquakes) that the USGS covered in its series of recent reports.

Although many media sources described these reports as verification that oil and gas drilling does induce earthquakes, as mentioned above, the phenomenon has actually been accepted for nearly half a century.

Many of the recent news reports linked the increase in earthquake activity specifically to fracking. However, most human-induced earthquakes in the U.S. are unrelated to fracking. And of those that are, the link is indirect.

I think the confusion comes from a misunderstanding of how oil and gas extraction works. There are several cases in which the process involves either taking water out of the ground or injecting it into the ground. 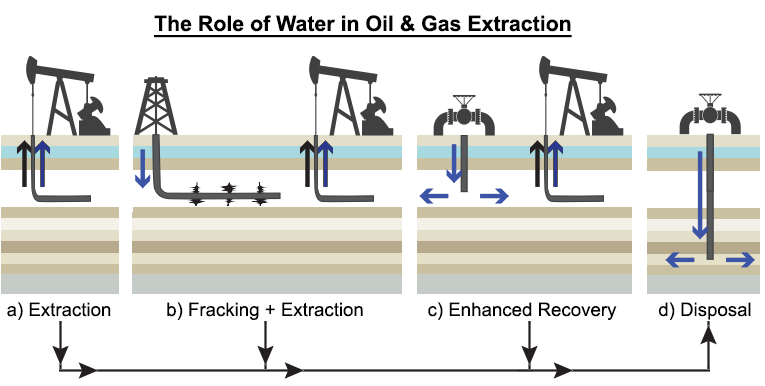 Of the four items listed above, only d) wastewater disposal is responsible for the vast majority of induced earthquakes.

While fracking involves the injection of liquid into the ground, the depth is in general too shallow to induce felt earthquakes. According to the USGS, there are only three reported cases in which fracking itself was responsible for an earthquake strong enough to be felt.

Like other forms of oil and gas extraction, fracking induces earthquakes indirectly, when the wastewater byproduct is injected deep underground.

Saying that deep wastewater injection causes earthquakes is not technically incorrect. However, cause could be interpreted to mean that humans are creating earthquakes where they would not otherwise occur.

What causes an earthquake?

An earthquake is the result of two blocks of earth suddenly slipping past one another, as shown in this graphic from the USGS.

Before the slip, the blocks are already in motion. But because their edges are bumpy, they get stuck against each other at the boundary. As the blocks continue to push in different directions, the pressure between them gradually builds. Once that pressure grows strong enough to overcome the friction, the blocks slide past each other suddenly, causing an earthquake.

When wastewater is injected near a fault zone, it effectively serves as a lubricant, causing these blocks to slip sooner than they otherwise would.

Wastewater injection induces earthquakes in the same sense that a doctor induces childbirth. Given the right conditions, they take an event that is already in process and cause it to occur sooner than it otherwise would. However, just as it would be odd to say that doctors cause children to be born, it is not quite right to say that wastewater injection is causing earthquakes.

If wastewater injection were causing earthquakes, that would imply a state like Florida, which is not known to have any fault zones, would have good reason to count earthquakes among the risks of oil and gas extraction.

In reality, Florida may have many other reasons to oppose oil and gas drilling, but the risk of inducing catastrophic earthquakes should not be one of them.

For the reasons explained above, a wastewater injection well is only capable of inducing a felt earthquake if it is located near a moderately large fault and only if that fault has accumulated a sufficient amount of built-up pressure.

Of the more than 35,000 wastewater injection wells active in the U.S., only a few dozen have been linked to induced earthquakes.

Why any of this matters

Like many areas of science that overlap with public policy, the science of fracking has been butchered by politicians on both sides.

“Oklahoma is located on a fault line, and seismic activity is believed to have been going on for thousands of years,” said Inhofe, chairman of the Senate Environment and Public Works Committee. “The practice of underground disposal has been used by the industry for 70 years, yet the uptick in seismic activity has only occurred in the past few years.”

Claims from the right denying the connection between fracking and earthquakes are just silly.

“Oklahoma is located on a fault line, and seismic activity is believed to have been going on for thousands of years.”
“The practice of underground disposal has been used by the industry for 70 years, yet the uptick in seismic activity has only occurred in the past few years.”
– Oklahoma Senator Jim Inhofe

Just as silly are claims from the left singling out fracking as the cause.

“Oklahoma became the number one place for earthquakes on Earth this year because gas companies inject fracking fluid back into the ground.”
– Bernie Sanders

According to the U.S. Geological Survey, “spent hydraulic fracturing fluid represents 10% or less of the fluids disposed of in salt-water disposal wells in Oklahoma.”

I don’t know whether fracking is good policy, but fake science should have no place in the debate.