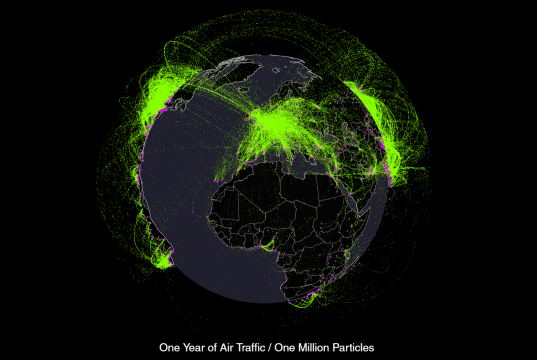 Select a country to view only that country’s incoming and outgoing air traffic.

This globe displays one year of global air passenger traffic. The data comes from modeled estimates compiled for the Vector-borne Disease Airport Importation Risk project (available for download at WorldPop). In 2010, the year for which the data was modeled, there were roughly 30 million commercial flights around the world carrying about 2.8 billion passengers.

In the graphic, the air passenger flows are visualized as 1.4 million particles — each one representing 2,000 passengers. Airports are shown as purple spheres, with their size denoting total passenger traffic over the year.

The globe should be running smoothly if your browser is up to date. But if your graphics card is complaining, try the 140,000-particle version.

For comparison, here is another map, this one made by Dr. Karl Rege at the Zurich School of Applied Sciences. It displays global air traffic over 24 hours.

For the most part, both maps reveal the same major patterns. The world’s air traffic is concentrated in the U.S. and Europe, with a few bright blips in south and east Asia.

What’s not apparent from looking at the smaller map, but is clear when you zoom in on the globe, is that those blips in Asia are actually denser and brighter than any individual route in the U.S. or Europe. The image below shows the U.S. (left) and China / Japan (right) at the same zoom level.

The busiest routes are not in the U.S. or Europe as you might expect. In fact, no U.S. flight route, those departing from or arriving at any U.S. airport, even cracks the top 100. Denver International to Hartsfield-Jackson Atlanta International, America’s most trafficked route, ranks only #101 worldwide.

More than anything, the globe offers a interesting perspective on how the world is connected. If you want to take a closer look, click here for the full screen map.

Use the following code to embed this globe on your website.