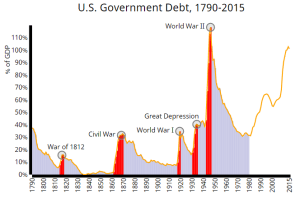 Through most of its history, the federal government did not have the power to tax incomes. How was it funded before the income tax?

Today’s national debt is big by historical standards, but it has been bigger. When was the country’s deepest debt, and how long did it take to pay back?

From the time it was founded until relatively recently, the U.S. government consistently spent about 3% of GDP each year. Today, the government spends roughly 20% of GDP per year. Where is all that extra money going?

A look through the history of U.S. government finances reveals some surprising facts. Scroll down to see how U.S. taxes, spending, and debt have evolved from 1790 to today.

There are many ways of looking at government debt, but it is most commonly reported as a percentage of GDP. By that measure, this chart shows where the national debt stood at the end of each year, starting in 1790.

Currently, the U.S. debt stands at about $18 trillion, roughly equal to U.S. GDP.

That is many times higher than the historical average, though it is not the highest in history. To fund the WWII war effort, the U.S. racked up a debt that peaked at 118% of GDP.

Pre-1980: debt rises in times of need, then gets paid back

Prior to 1980, the U.S. had undergone only five brief periods of rising debt levels: four times to finance major wars and once to stimulate the economy during the Great Depression.

That steep red line starting in 1980 coincides almost exactly with the Ronald Reagan / George H. W. Bush era. At first glance, it would seem obvious that their economic policies are to blame. However, as the next two charts show, 1980 was not the only important turning point in U.S. financial history.

Debt results when a government spends more money than it takes in. The next two charts show each of those two pieces, spending and revenue, broken out separately.

Until the mid-1900’s, annual spending was consistently about 3% of GDP

Aside from spikes during wartime and the Great Depression, government spending was remarkably stable throughout most of U.S. history. From the country’s founding until 1930, annual spending fluctuated around 3% of GDP, give or take a percent.

Comparatively, today’s spending looks absurd. Since 1980, the U.S. government has spent an average of 20% of GDP per year.

Social Security and Medicare / Medicaid did not exist until the mid 1900’s. Today they account for over half of government spending.

On the other hand, the interest expense is currently about average by historical standards. Although the amount of debt is high, the interest rates on that debt are very low.

Spending breakdown, as a % of total spending

Before 1930, the government spent three-quarters of its money on just two things: defense and interest on debt, most of which was used to finance defense spending. So, really just one thing: defense.

All of the government’s non-defense-related spending amounted to less than 1% of GDP per year.

While U.S. government spending has certainly undergone big changes, even more dramatic is the evolution of government revenue.

Taxes spiked during World War II and never came back down

The spending during World War II was financed half with debt and half with tax increases. In 1940, the U.S. took in $7 billion in tax revenue. By 1945, its revenue had ballooned to $45 billion.

After the war, spending fell off sharply, but since the U.S. needed to pay back the money it had borrowed, taxes did not. And they have remained at more or less the same levels ever since.

Looking at the breakdown gives a real appreciation for just how dramatically things changed from the early to mid 1900’s.

In 1910, the government’s revenue looked much like it did in the time of George Washington: 3% of GDP, earned primarily through tariffs.

By 1930, the government was claiming away twice as much money, and through entirely different means. But anyone who was hoping that those 1930 taxes would return to “normal” was in for a rude awakening about a decade later.

Revenue breakdown, as a % of total revenue

For most of U.S. history, the federal government earned its revenue through passive means, which seem unimaginable by today’s standards.

The government raised money through a combination of tariffs (on imports), excise taxes (on tobacco and alcohol), and sales of frontier land. At different points, each of the three had a turn as the #1 revenue source.

The rise of income tax

Today, income / social security taxes make up 80% of government revenue, and taxes on corporate income account for an additional 11%.

It’s striking to consider that the government got by for most of its history without them. The corporate tax was not implemented until 1909, and the income tax, not until 1913!

If you’re curious to know how the income tax was perceived when it was introduced in 1913, this article, dug up from the New York Times archive, offers a clue.

The officials at Washington blandly assure those struggling with the income tax law and regulations that they will like it when they get used to it. Just so it is said that eels who grow a second skin come back to be skinned again.