Home » World » How Many U.S. Cities Can You Fit Inside Tokyo?

According to a 2014 report by the U.N., “Tokyo is the world’s largest city with an agglomeration of 38 million inhabitants.”

That can’t be right, you might say. No city has that many people. It says on Wikipedia that the population of Tokyo is only 13 million.

From a more technical perspective, there is only one City of Tokyo, and it’s population is 9 million.

In actuality, all of these statements are correct, each referring to a different meaning of “city.” Defining the boundaries of a city or even what a city is raises many thorny issues, and that’s especially true of Tokyo. Previously this post began by defining Tokyo, but after several debates over which definition was the correct one to use, I think it’s actually clearer to take Tokyo out of the picture.

Region X (forgetting for a moment that it’s Tokyo)

If you don’t see any red, you have to look close because it includes only 17 small dots. These dots are the locations with the highest population density on Earth, given their size. And the densest one of all is in Japan.

Looking closer at this region of Japan, let’s call it Region X, it has an area of 13,556 km², which is about the size of Los Angeles County. But its population is roughly 38 million, as much as the entire state of California.

The population of California in a region the size of L.A. County 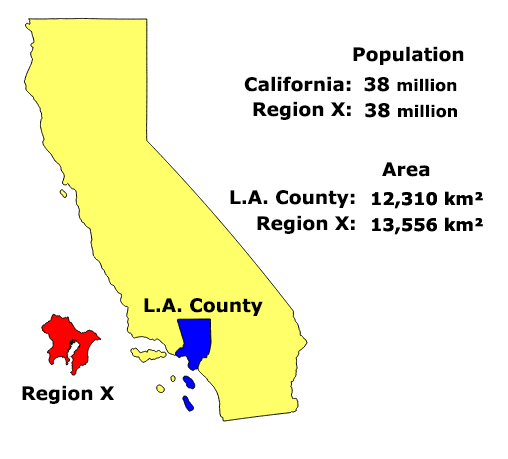 Region X clearly has a lot of people for an area that small, but California is not the best comparison. It has some very big cities, but it also has large sections that are uninhabited.

The population of Region X in terms of U.S. cities

Another way of conceptualizing the population of Region X is by comparing it to U.S. cities. 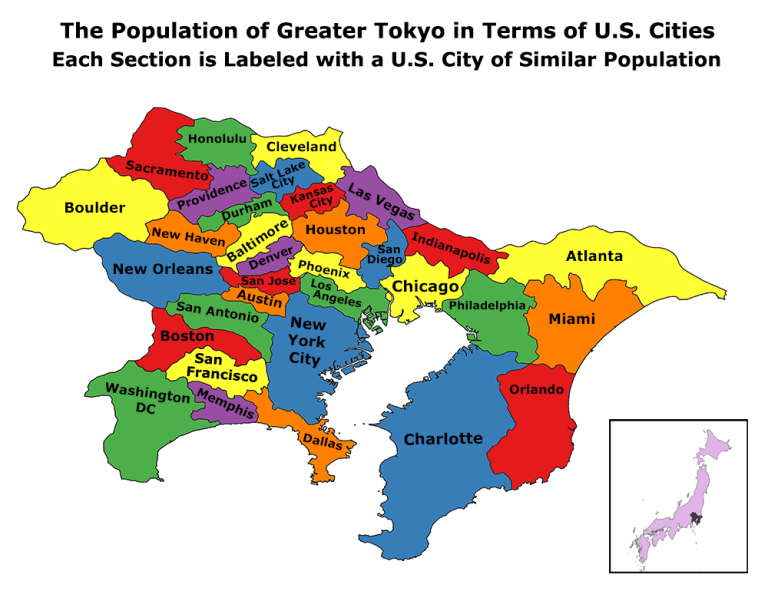 Source: 2010 Census population stats for Japan and the U.S.

Region X is actually Tokyo (Tokyo Prefecture) plus the prefectures of Chiba, Kanagawa, and Saitama. Together, this region makes up Greater Tokyo (as defined by the Tokyo Metropolitan Government).

There are other possible ways of defining Greater Tokyo, but under any of them, it is far and away the most populous human settlement (metro area / urban area) in the world.

And given its population, Greater Tokyo is also extremely small in size.

Combined, the New York and Los Angeles metro areas have about the same population as Greater Tokyo. Yet Greater Tokyo is about one-tenth the size.

Tokyo’s borders conceal some of its most exceptional qualities

With 13 million people, the population of Tokyo (Tokyo proper) is big, but unexceptional. For comparison, Shanghai has a population of 24 million.

Tokyo has a population density of 6,000 people per km², which is above average. But its density doesn’t compare to a city like Manila, which has 42,857 residents per km².

However, these definitions of city depend on arbitrarily drawn borders, which makes comparing them a fundamentally artificial exercise.

A more natural way of looking at population is to forget about borders, and view the world as collections of people living together. By this measure, Tokyo’s (Greater Tokyo) population is #1 in the world.

Similarly, Manila and Tokyo may both be cities, but with one being 20 times the size of the other, comparing the density of their populations is not exactly apples-to-apples. More meaningful would be to compare areas of the same size. And for it’s size, Greater Tokyo’s population density is also #1 in the world.

With the exception of Monaco, Japan has the oldest population in the world, and therefore a very low birthrate. To see how the world’s population will look in 2100, see: Mapping 300 Years of World Population Growth.