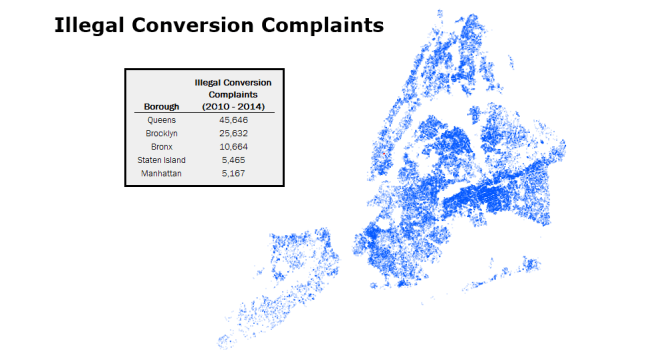 What is an illegal conversion?

According to this pamphlet from the NYC Dept. of Buildings, an illegal conversion is:

an alteration or modification of an existing building to create an additional housing unit without first obtaining approval from the NYC Dept of Buildings.

Why are illegal conversions a problem?

According a Gothamist story from earlier this month, state senator Martin Golden is calling on the City to form a task force to combat illegal conversions, calling it “one of the most pressing problems facing the south Brooklyn community.”

And it seems south Brooklyn is not alone. Since the start of 2010, the City’s 311 complaint hotline has logged a city-wide total of 92,574 illegal conversion complaints, plotted in the map above.

Clearly many people view illegal conversions as a major problem.  But it was not immediately obvious to me why.  So I dug around to see if I could find a good explanation.

Below is a rundown of the various reasons I found. Judge for yourself whether any of them make sense to you.

Reason #1: Illegal conversions are a strain on local resources

According to the Dept of Buildings pamphlet mentioned above, illegal conversions are harmful because:

“…they reduce a neighborhood’s quality of life by straining essential services, causing over-crowding and reducing the already-limited amount of industrial and manufacturing space necessary to support local businesses.”

Not an entirely satisfying answer…

According to this Brooklyn Eagle article, illegal conversions cause:

“…a strain on sanitation, water and sewer usage.”  It also states, “developers are buying these one and two-family homes and paying inflated prices for them so that they can subdivide them. That affects the real estate market and people’s property taxes.”

From a blog called Clean up Jamaica Queens Now:

“Illegal conversions are not only dangerous, but destroy a community and lower property values.”

Now this is getting interesting…  Not only is there disagreement about how illegal conversions affect property values, but also about whether it is better for them to go up or down.

Reason #4: Illegal conversions are a safety hazard for firefighters

This story from Pix 11 News states that illegal conversions cause:

“…dangerous situations for firefighters” because of “inaccurate plans”

I have the highest respect for New York City’s firefighters, who risk their lives to protect others.  So this is not an issue I wish to minimize. But are illegal conversions really putting fire fighters in such serious danger?

Reason #5: Illegal conversions are a danger for their inhabitants

The safety of residents, however, is a different story. This post by Change.org states:

Based on FDNY data for the two year period 2012 to 2013, there were 49 fires that resulted in fatalities.  Of these 49 buildings, 19 of them had previously received a complaint for having been illegally converted.

In other words, about 40% of fatal building fires occurred in buildings likely to have been illegally converted. 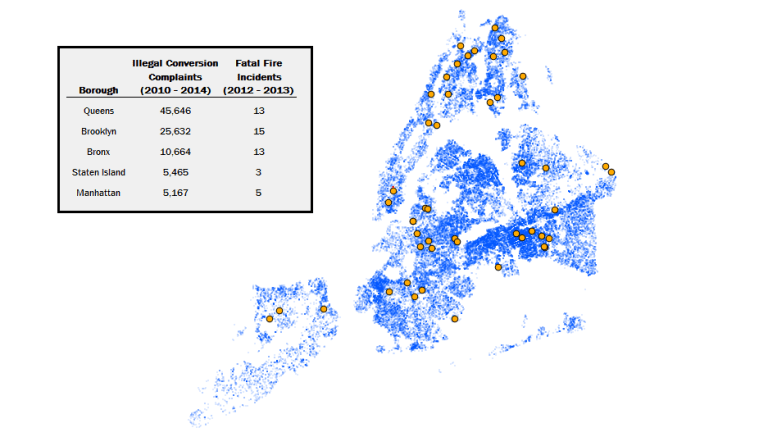 Based on these numbers, it is hard to dispute that residents of illegal conversions are at greater risk of being harmed in a building fire.

However, it is not the inhabitants of illegal conversions who are complaining, it is their neighbors. Is their opposition really out of concern for the safety of others?

More importantly, does a policy of eliminating illegal conversions actually benefit the inhabitants?

The Department of Buildings found conditions at 249 Norman Avenue to be “imminently perilous to human life” following an inspection Feb. 10th. The roughly 25 tenants were given a week to collect possessions and now have to find another place to live. 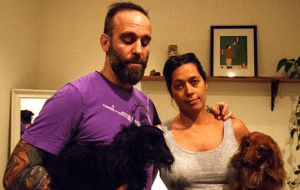 Aaron and Jennie Drogoszeski with their miniature daschunds Pita and Clyde. With their first child soon on the way, the couple have been turned out of the Greenpoint apartment they’ve lived in for more than three years.

What kind of housing policy throws families out on the street to protect them from fire code violations?

New York’s schools are indeed overcrowded, but is that really the issue here?  If so, wouldn’t it be more logical to campaign for the City to build more schools?  Hire more teachers?

Is throwing those children and their families out on the street really the best solution?!

From the same townhall meeting,

One attendee drew a rhetorical line from illegal conversions to an increased presence of massage parlors, sweatshops, signs of human trafficking, and trash. Some hoist those problems on the neighborhood’s growing Asian-American population, and at least one person made a comment briefly bringing such tension to the forefront.

“I don’t feel comfortable with an Asian in the room, I have to admit,” shouted one attendee from the crowd.

Are these the people our elected officials are pandering to?

Maybe there really is a good reason for such strong opposition to illegal conversions. But at the surface, it sounds a lot like:

Redlining – the practice of, in the United States, denying, or charging more for, services such as banking, insurance, access to health care, or even supermarkets, or denying jobs to residents in particular, often racially determined, areas.

De facto racial segregation – during the 1950s and 1960s was simply discrimination that was not segregation by law (de jure).

Taking them at their word, it appears our elected officials are advocating for families to be thrown out on the street as a solution for: 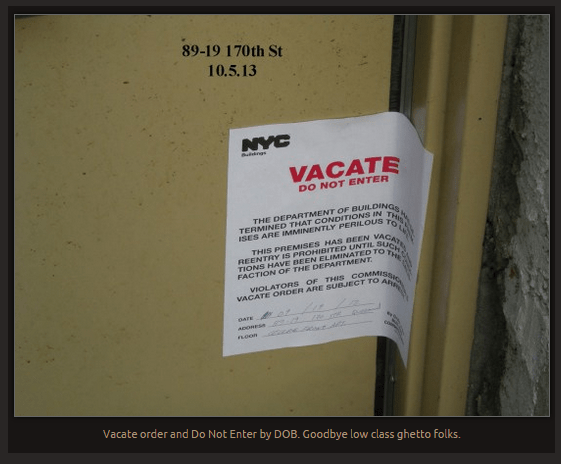 I think Councilman Menchaca and his fellow elected officials owe us a better explanation.

My latest project, Elementus, aims to bring transparency to the cryptocurrency market. Check out our blog for some crypto-related data visualizations.
Follow Metrocosm