Explore the map below to see how the distribution of incomes in American cities has changed since 1970. Select one of the eight cities shown and toggle between years. The color and height of each region correspond to that area’s median household income, adjusted for inflation.

To navigate the map with a mouse:

Each city is divided up by its Census tracts, small territorial units of roughly-equal population (about 4,000 people each). The color and height of each Census tract correspond to the inflation-adjusted median household income of its residents.

Since 1970, the US economy has grown significantly larger. Real US GDP per capita, a measure of the country’s average income, has more than doubled. However, the median household income, a measure of what the typical American family earns, has not kept up. Across the US, median household income has increased by only about 20% over the same period.

Such a large disparity between the average and median incomes is possible because the economic gains have not been shared evenly. They have been realized predominantly by high-income households, with only a small share going to the lower majority of the income spectrum. And this uneven split has grown increasingly imbalanced over time, as shown in the following chart from The Upshot. 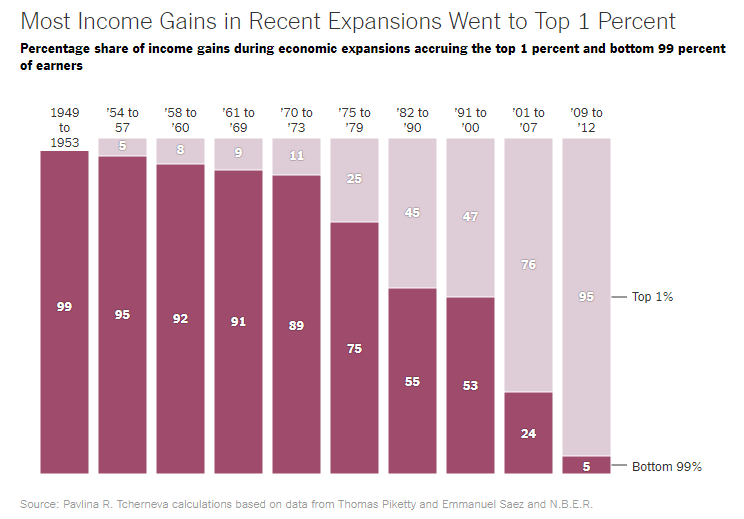 In the most recent period examined, between 2009 and 2012, a full 95% of the country’s economic gains were claimed by the top 1 percent of households. The result is an income distribution that looks like it’s been “squashed,” as illustrated brilliantly in this animated chart by the FT.

The flattening income distributions of US cities

This trend is not only happening at the nationwide level. Income distributions within individual cities are also being flattened.

Since 1970, some cities, such as San Francisco, have fared well economically. Others, such as Detroit, have struggled. But nearly without exception, American cities have seen a sharp rise in inequality — a widening gap between those at the top of the income spectrum and those at the bottom.

Like the map above. this graphic shows the distribution of median household income across each city’s Census tracts. It includes the eight cities from the map as well as 12 additional major US cities.

In 1970, each of these cities shows a near-symmetrical, bell-shaped income distribution — a high concentration of people in the middle, with a narrow tail of low and high-income households on either end.

Is America’s middle class being “crushed”?

Contrary to the prevailing view that America’s middle class is in terrible shape, the typical US household today is earning about 20% more than in 1970, after adjusting for inflation. That’s small relative to the growth of the economy and even smaller compared to the income growth seen at the top of the spectrum. But it means the middle class is no worse off today income-wise than in 1970. So, to say the middle class is being “crushed” may be a stretch. On the other hand, there are real societal costs when wealth is distributed in a way that is perceived as unfair.

These contrasting views are explained well in the posts below, both from people I greatly respect: