Home » Technology » 10 Forces That Threaten to Tear the Internet Apart

“…the Internet is in some danger of splintering or breaking up into loosely coupled islands of connectivity. A number of potentially troubling trends driven by technological developments, government policies and commercial practices have been rippling across the Internet’s layers…”

The Internet is at a crossroads.

Since its birth over 30 years ago, the Internet has generally adhered to its original vision: a decentralized and universally connected network. That is to say, any connect device is generally free to exchange information with any other device that is willing to receive it. However, the Internet of tomorrow faces a series of new challenges which, if allowed to accumulate unchecked, threaten to splinter the Internet across national, commercial, and technological boundaries.

In a World Economic Forum white paper published earlier this year, three leading experts, including Vinton Cerf, widely regarded as the “father of the Internet,” map out the Internet’s fragmentation landscape, concluding with a “top 10” list of forces to be watched.

These 10 forces are summarized in the chart below, each characterized by three key attributes: 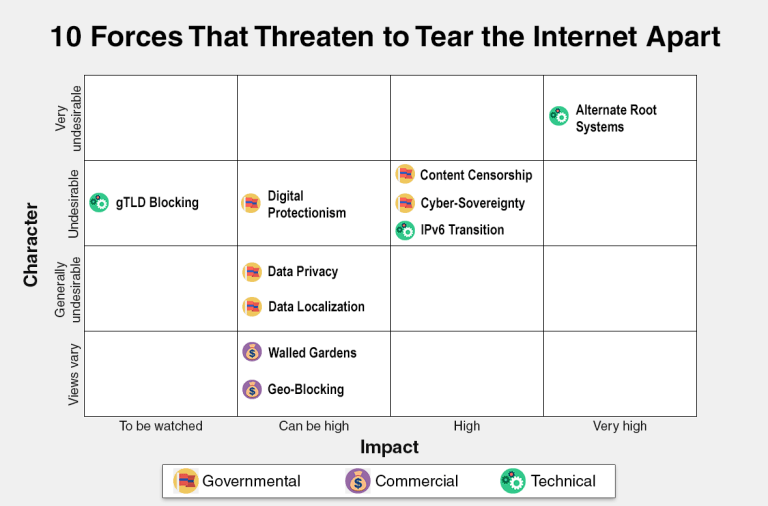 What are the motivations behind these forces? And after more than 30 years of a universally connected Internet, why are they appearing only now?

The three forms of fragmentation shown in the chart (governmental, commercial, and technical) are each driven by separate trends and forces, and threaten to impact the Internet at different levels. Below is a summary of each one, along with specific examples of the risks they pose.

“Conditions in the underlying infrastructure that impede the ability of systems to fully interoperate and exchange data packets and of the Internet to function consistently at all end points.”

In 1983, the technological concepts pioneered by Vinton Cerf gave birth to the modern Internet, which at the time comprised only a few hundred government and research organizations.

Since then, the Internet has grown exponentially, reaching an estimated 13.4 billion connected devices in 2015, with projections as high as 38.5 billion devices by 2020. Yet, the core technological concepts on which the Internet depends remain largely unchanged since 1983.

“Business practices that constrain or prevent certain uses of the Internet to create, distribute or access information resources.”

With the Internet economy now accounting for 6% of global GDP, businesses face ever-growing economic incentives to fight for control of the e-commerce pie.

“Government policies and actions that constrain or prevent certain uses of the Internet to create, distribute, or access information resources.”

The Internet was originally conceived as a neutral, decentralized network that would transcend physical borders to promote the international good. But as the Internet has grown, so has its influence over countries’ national interests, whether those interests be national security, economic growth, data protection, or global geopolitics.

To read more about these forces, and others, that threaten the modern internet, you can find the full World Economic Forum report here.