Home » Economy » Is the Lottery a Tax?

Is the lottery a tax?

Having been challenged on this question countless times in the last few days, two things have become clear to me.

The purpose of my last post was to highlight how harmful the lottery is to society. Whether or not it’s a tax is only a minor point, but it still matters. If you view the lottery purely as a voluntary game, then it’s a bit easier to dismiss the idea that there could be anything wrong with it. Acknowledging that the lottery is a tax means acknowledging that least some aspect of the game is being “imposed” on people.

If you’re curious to understand better why revenue from lotteries is, in effect, a tax, you’ve come to the right place. Hopefully this helps clear it up.

If you’re looking for me to make an argument that proves it’s true, you’re going to be disappointed. It’s not my theory, or even a theory at all. It’s just economics.

If you don’t believe me, head over to Google Scholar and search for lottery excise tax. It will return many results, all written by people far more qualified than I am.

Explanation from a pro

In my post about the lottery, this is what I said:

To settle the matter, I reached out to an expert, Professor Ross Rubenstein, an education policy and public finance researcher at Georgia State who has authored several papers on lotteries. According to professor Rubenstein, “Revenues raised by lotteries can be viewed as an excise tax on one item – lottery play.” He sums it up well in this article published in the National Tax Journal.

“If a competitive market existed for lottery products, it is unlikely that each firm’s profits would approach 35 percent of revenues. Although purchases of lottery tickets are ‘voluntary,’ the implicit tax on a dollar spent on a lottery product is not voluntary, just as sales taxes paid on purchased goods are not voluntary.”

Choosing to play the lottery is voluntary. But much like sales taxes, the inflated price of lottery tickets is not.

It is illegal for anyone but the state to run a lottery. So unlike casinos, which face competition from other casinos, lotteries operate as a monopoly, so they can set their pricing artificially high, or equivalently, their payout rates artificially low.

Explanation from an amateur

The implicit “lottery tax” functions just like the excise tax on liquor, tobacco, or fuel.

Now imagine the government nationalizes the liquor business. It buys up every liquor company, and it continues operating them the same way as before ($10 price + $2 tax). I think anyone would agree that this $2 would still be considered a tax.

Next, the government gets rid of the $2 tax, but increases the price of liquor to $12. Nothing has changed economically. The tax is still there, it’s just implicit now. The implicit lottery tax is exactly the same.

The “tax” in this case is what you pay on top of the market price. It doesn’t matter whether the tax is broken out as a separate charge or whether it’s baked into the price. In either case, if you want that liquor, you have to pay an extra $2 to the government.

“A tax is compulsory. The lottery is voluntary, so it’s not a tax.”

A tax is defined as

“a compulsory contribution to state revenue, levied by the government on workers’ income and business profits or added to the cost of some goods, services, and transactions.”

It seems like there’s a contradiction in there. It describes a tax as “compulsory,” but it also says taxes can apply to goods and services, which are clearly voluntary transactions.

It is much clearer when you consider that it’s only the “contribution” that is compulsory. You don’t have to buy that liquor, but if you do, you have to pay the $2 tax.

“By the same logic, every payment would count as a tax. When you buy something, you are always ‘compelled’ to pay money.”

If you’re making this argument, you’re probably too smart for your own good. It’s great logic, but if you have the patience to think it through, it’s not quite correct.

So there is clearly something that differentiates sales taxes from other payments.

For one, taxes go to only the government and never to private businesses or individuals. The other piece of the transaction, the market price, goes to the party you’re transacting with. That’s clear.

It only gets confusing if that other party in the transaction happens to be the government. In this case, the government receives both pieces, the sales tax and the market price. However, there is something else that differentiates taxes from market prices. 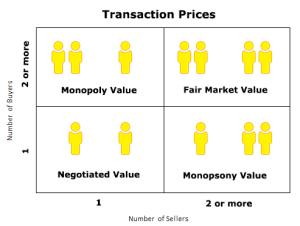 Back to the liquor example:

Previously, you were able to buy liquor from a private business for a market price of $10 (plus a $2 tax). Then the government took over the industry and bumped the price up to $12.

At this point, the only person offering liquor is the government. So there is no longer a competitive market for liquor. However, even without a market, there is still a market price. The legal term is fair market value, the theoretical price at which a buyer and seller would agree if there were a market.

This concept may seem like some obscure idea I pulled out of a dictionary, but it’s actually used all the time in very practical ways. In fact, appraisers are an entire industry build around estimating fair market values.

“A sales tax is a tax because it applies to necessary items like food and clothing. You have to buy those things. you don’t have to play the lottery, so it’s not a tax”

If you’re making this argument, let’s just agree to disagree.

There is an excellent paper on this topic written by Duke Professors Charles Clotfelter and Peter Cook, perhaps the leading experts in the world on the topic of lotteries.

“Because the purchase of tickets is entirely voluntary, lottery proponents sometimes argue that it is inappropriate to apply conventional concepts of taxation, such as regressivity or “tax burden,” to lotteries. By this argument, lotteries constitute a “painless tax” and should not be compared to excise or income taxes. The apparent confusion here may result from the fact that the lotteries are in every case state-owned enterprises which are operated for “profit,” with the state treasuries being the residual claimants….lottery states are in the business of selling a product at a price considerably above average cost for the primary purpose of financing other government activities. not only is it appropriate to label the resulting net revenue an implicit tax, it is interesting to note that this implicit tax is closely analogous to a corporate tax on net income, but with a tax rate of 100 “