Home » Economy » How High Is the True U.S. Unemployment Rate?

The unemployment rate is back to early 2008 levels. Does that mean the economy has recovered?

In the most recent U.S. jobs report, released at the end of last month, the unemployment rate remained stable at 5.1%. Taking this number at face value, U.S. employment has returned to pre-crisis levels, and it would seem the economy is back to normal.

However, as we all know, the unemployment rate is not a perfect measure. It does not account for various groups of people who are not working and do want a job, but for one reason or another do not fit into the official definition of “unemployed.”

Still, for all the times I have read that we should not blindly trust the unemployment rate, I don’t recall ever seeing a clear explanation of exactly what groups are omitted from the calculation.

It turns out there are many. 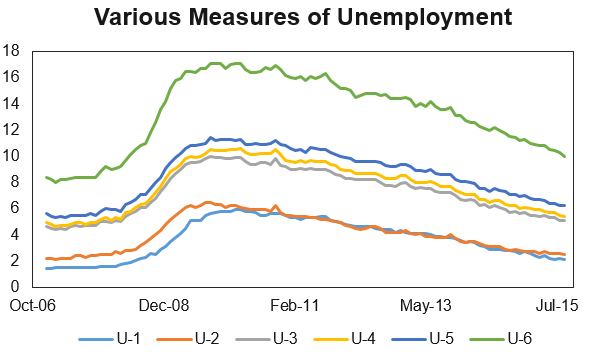 Here is how the Bureau of Labor Statistics (BLS) describes each of these measures:

Part-time workers unable to find a full-time job are the only group that raises the number by a substantial amount. And while I fully appreciate the importance of measuring this group, it’s pretty logical that underemployed workers would not be included in the unemployment rate. So it seems like a stretch to call the unemployment rate wrong for this reason alone.

People who want a job, but did not search in the past year are not included in any measure

The alternative unemployment measures listed above contemplate two groups of people who want a job, yet are not technically considered “unemployed” (discouraged workers and marginally attached workers). However, there is a third group that is left out from these measures: people who want a job, but did not search in the previous year.

This group is not only the largest of the three, but it has also continued growing steadily since 2007, whereas the other two groups initially grew, but have since recovered. 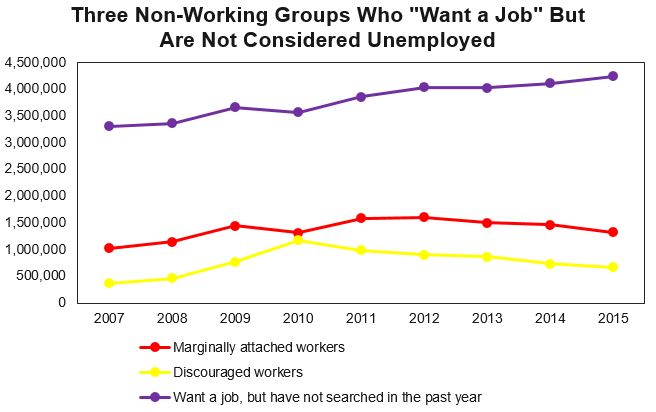 The third group, people who want a job, but have not searched for one in the past year, is not included in any of the alternative unemployment measures. It’s trend is strictly upward, and does not conform to the economic recovery narrative.

Disability programs have also removed people from the labor force

Another group that is not commonly discussed in the context of the employment picture is the skyrocketing number of people on federal disability.

Before you call me out for picking on people with disabilities, please have a look at this excellent post from NPR’s Planet Money, which goes into depth on the topic. The story is fascinating.

Somehow, federal disability programs have remained under the radar, despite having grown immense in size. Not to minimize their importance for people who have legitimate disabilities, but for many people who do not, these programs have essentially replaced welfare as an alternative source of income for people who are discouraged / hopeless about their employment prospects.

These disability programs have also continued to grow throughout the economic downturn and recovery. With a few small exceptions, beneficiaries of these programs are not counted in the official unemployment rate or any of the government’s alternative unemployment measures.

How does the picture look when you put these pieces together?

To what degree is arguable, but groups (a), (b), and (c) all include working-age people who are not currently employed, but would like to work if circumstances permitted.

If you were to include these groups in the unemployed population, the total number becomes essentially flat since 2009.

What do you think? Is the unemployment rate just a big lie? Or is it the best measure of unemployment we have, despite it’s flaws?