Home » Science » Every Recorded Hurricane, Cyclone, and Typhoon Since 1850 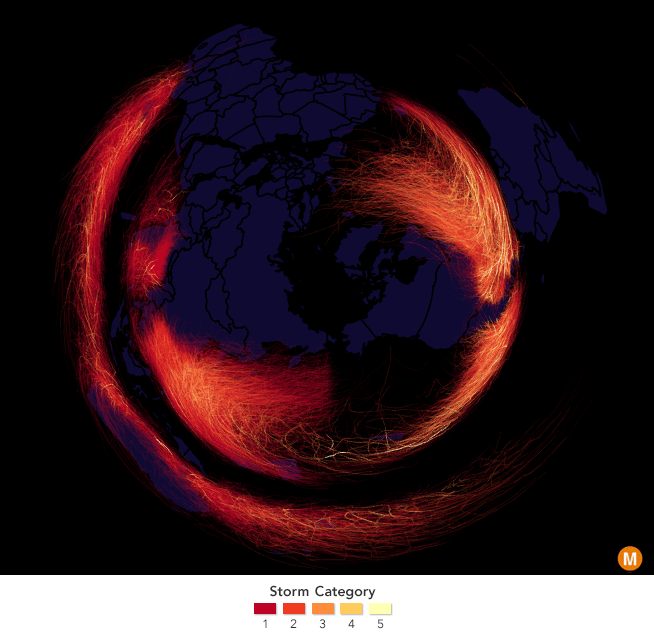 Every recorded hurricane, cyclone, and typhoon since 1850

Based on the NOAA’s historical tropical storm tracks data, which includes storms dating as far back as 1850, the map above shows a top-down view of every hurricane, cyclone, and typhoon in recorded history.

Hurricane, cyclone, and typhoon are all terms for the same phenomenon (technically tropical cyclone) in different parts of the world. They all refer to a tropical storm with sustained wind speeds of at least 74 mph. 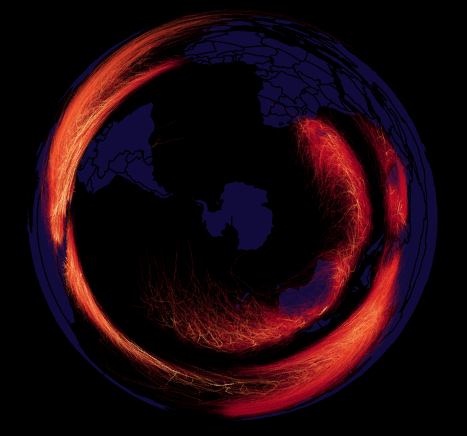 View from the southern hemisphere

The other day I wrote a post on fracking and induced earthquakes, an area of earthquake science that has gone misunderstood / misreported. Having formerly worked as a catastrophe modeler, it occurred to me there is also a recent trend in hurricanes that has largely been overlooked.

The U.S. is currently going through an extended period of hurricane inactivity, with no major hurricanes having made landfall in the last 11 years. As a result, hurricanes have not received the media attention they deserve.

Though 2015 was a quiet year in the North Atlantic, from a worldwide perspective, last year’s tropical storm season was the most intense in recorded history.

The U.S. is currently experiencing its longest hurricane drought in recorded history 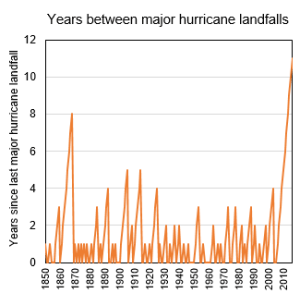 In the U.S., no major hurricane has made landfall since hurricanes Katrina, Rita, Wilma, and Dennis struck back in 2005. A hurricane is considered “major” when it reaches category 3 status, with sustained winds of at least 111 mph.

That puts the U.S. in a hurricane drought of 11 years and counting, the longest in recorded history. The previous record of 8 years dates back to the 19th century, between 1861 and 1869.

For comparison, on average, about 2 major hurricanes make landfall in the United States every 3 years.

Meanwhile, the northern hemisphere just had its most intense tropical storm season ever

It’s surprising, but true. While the U.S. has been experiencing a hurricane drought, at least in terms of hurricanes making landfall, the northern hemisphere just had the most active tropical storm season in recorded history.

Here are just a few of the records set by last year’s tropical storms. 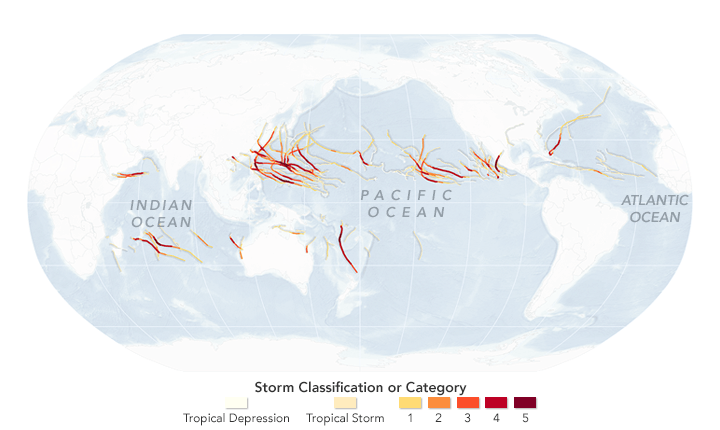 Tropical storms in 2015, image via NASA

What’s behind the record-breaking intensity of last year’s tropical storms?

It’s too soon to draw any conclusions. However, several pieces of recent research suggest the Earth’s warming climate may play a role.

The map at the top (which as pointed out by @kimaidou looks amazingly similar to the Firefox logo) comes from a recent talk I gave about map making with GIS. If you would like to see how it was made, you can find the notes from the talk here.