Home » Culture » The Most Credible UFO Sightings And An Interactive Map

Based on data from the National UFO Reporting Center, the map below displays over 90,000 reports of UFO sightings dating back to 1905. Each circle corresponds to a reported UFO, with the size representing the number of reports received.  Thanks also to the Mutual UFO Network for allowing me to reproduce images and videos from their website.

The most corroborated UFO sightings

Assuming more reported sightings = more credible, these are the 10 most credible UFO sightings in recent history in the U.S.

Illinois is involved in 6 of the 10 UFO sightings listed above, as well as several other mass UFO sightings further down the list.

I thought that was interesting because when you look at the total UFO reports per capita, IL actually ranks pretty low compared with other states.

Hover over the map to see how the states measure up

My initial thought was that it must have something to do with O’Hare Airport, the busiest airport in the U.S. through most of this period.

Are there many UFO sightings around other busy airports?

The blue markers are the five busiest airports in the U.S.

Aside from Chicago, it does not appear there is much correlation between mass UFO sightings and big airports.

One pattern I did notice was that many of the mass UFO sightings occur particular dates.

Here is what you get if you plot the number of UFO sightings for each day of the year. 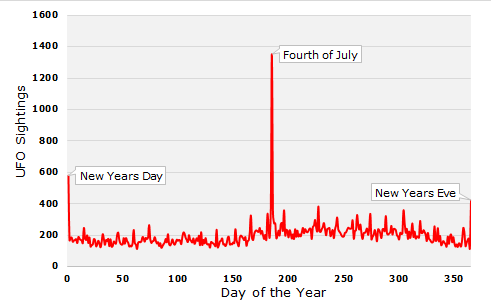 UFOs seem to have a penchant for firework displays.

Both #5 and #8 in the list above occurred on the Fourth of July. And in both cases, the UFOs were described as “fireballs.”

Aside from the obvious explanation, it could just be that more people are looking up at the sky on those nights.

Take a look at these three videos of the “Washington Fireball” UFO sighting, which occurred on July 4th of 2012, and see whether you think they are actually fireworks.

Some of the bigger UFO sightings also coincide with large meteor showers or space craft launches. Though when I looked into it, the effect did not come out very strong.

Update:  A few people thought it would be interesting to see how UFO sightings match up vs military bases.

Here is a plot of all military installations, ranges, and training areas. Though without an idea of which ones to focus on, I think there are too many to draw any real conclusions. 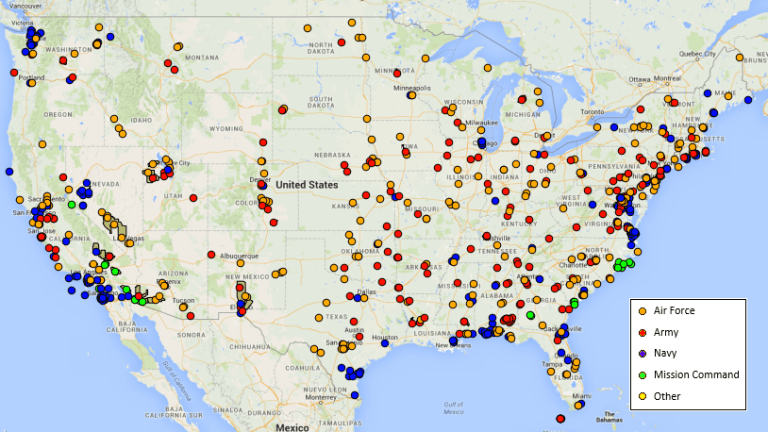 A few others asked to see the trend of reported sightings over time.

For the past 20 years, it has been growing at a pretty steady rate of about 350 additional reports each year. 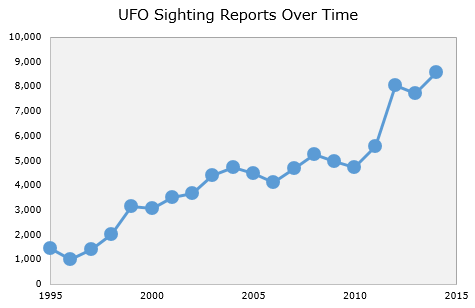