This map shows how it happened, country-by-country.

The color of each county represents its adult obesity rate in the year shown. Hover over a country to see what its obesity rate was in 1975 and what it is today.

Without exception, obesity rates have risen in every country around the world.

The largest changes occurred in smaller Pacific Island countries. Samoa, Tonga, and Tuvalu all saw their obesity rates increase by more than 20 percentage points, a doubling of what they were in 1975.

That country that struck me most of all was China. In 1975, only 0.5% of Chinese adults were obese. Today, China’s obesity rate is about 8%. At China’s current population, the difference amounts to over 100 million people.

How global obesity has changed since 1975

The data for the map comes from an extensive study published earlier this year in The Lancet.

The researchers compiled data from 1,698 obesity-related studies, covering 19.2 million people in 186 countries. They then used the information to estimate the distribution of body mass index (BMI) for every country in the world, for every year from 1975 to 2014.

Put a different way, in 1975 there were 105 million obese adults in the world. Today there are 641 million. (During the same period the world population increased from 4 billion to 7.2 billion).

The study also estimates that 2.3% of the world’s men and 5% of the world’s women are severely obese. In 1975, the prevalence of severe obesity was just a fraction of 1% for both genders.

Obesity by country and gender

The chart below shows the age standardized obesity rates in 2014, broken down by country and gender. It includes all countries with a population of 10 million or greater.

There are some clear patterns by region. In Europe and the U.S., obesity rates for men and women are roughly equal. In southern African countries, the proportion of obese woman is more than double that of men. 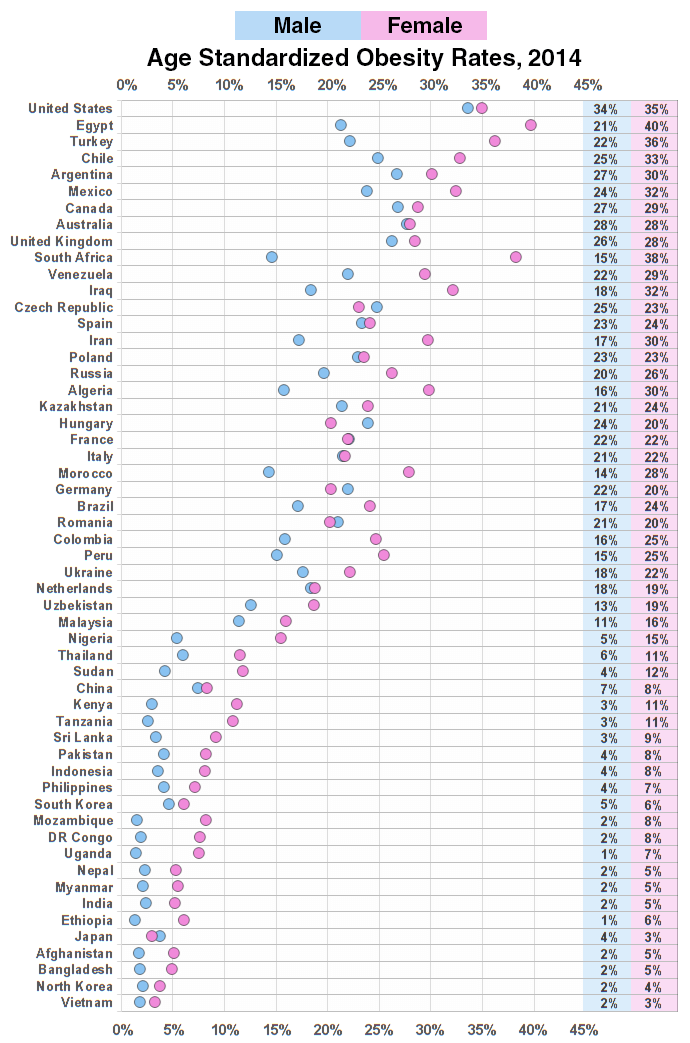 The study also makes a prediction of what global obesity may look like in the future.

For a related map showing the rise of U.S. obesity state-by-state, check out American Obesity in 4 Graphics. If you still haven’t have your fill of obesity maps, see what the world’s obese population looks like visualized as a cartogram (aka obesochart).