Home » Cartography » Your World Map is Hiding Something

Take a look at a map of the world.

If it looks like this one, as most do, you will see that Alaska appears larger than Mexico and that Greenland looks about the same size as Africa.

In reality, Mexico is larger than Alaska and Africa is about 14x the size of Greenland. The maps below show how their true sizes compare (images from The True Size Of). 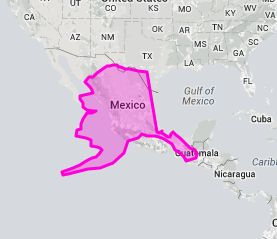 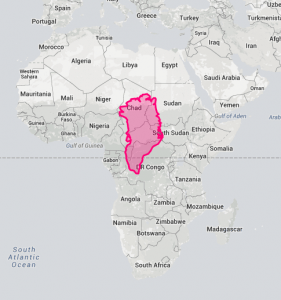 Because the world is a sphere, it is impossible to draw it on a flat surface without distorting it in some way. These distortions are known as map projections, the mathematical rules for how to stretch each point on the Earth’s surface onto a 2-dimensional plane.

This particular map uses the Mercator projection, the most popular map projection today and almost certainly the one you are most familiar with. When you imagine the world, the size of each continent and where they sit in relation to each other, chances are your mental image looks like this. But as familiar as this picture of the world may seem, this “normal” map is actually quite strange.

In addition to the distorted sizes mentioned above, the Mercator projection has several other odd features. For one, some parts of the world are missing. Both the top and the bottom of the map are clipped.

If you haven’t done so already…

As you move further down the map, the terrain begins to zoom in closer. About halfway down a physical structure appears, the Amundsen–Scott South Pole Station. Further down, the texture of the snow on the ground comes into view, and below that, individual snow flakes.

In theory, the Mercator projection continues on to infinity. If this image were to continue, it would eventually zoom in to the scale of individual atoms and beyond.

This image of the extended Mercator comes from The Mercator Redemption, a 2013 paper from the Proceedings of Bridges journal. It’s a good, quick read if you want to learn more about this odd feature of the Mercator projection.

The paper makes the case that the Mercator projection has many possible applications in digital photography and graphic design. The fractal-like infinite scaling feature can make for some striking digital panoramas. However, the authors acknowledge the reality about the Mercator: it’s not very good for making practical world maps.

Can a map be racist?

The Mercator is not the most popular map projection because it is necessarily the best one. Its popularity is a historical legacy that has persisted since the 16th century, a time when maps were important tools for ocean navigation.

All map projections have strengths and weaknesses. The Mercator is accurate with respect to angles. Lines of constant compass heading appear as straight lines on the map. In other words, if a ship sails in a constant direction according to its compass, Mercator will show its path as a straight line. This feature is not true of all map projections, and it is clearly an important one for navigation. However, it comes with a cost. The Mercator’s biggest shortcoming is its inaccuracy with respect to size. And in this case, size matters.

The problem is not just that the Mercator gives an inaccurate picture of the world, although it does. What makes the Mercator projection particularly controversial is that it makes Europe and the United States look much larger than they really are, giving them more prominence. Likewise, it takes prominence away from Africa, South / Central America, and everywhere in Asia except for Russia.

Compare the sizes of Europe and the U.S. under the Mercator projection to their sizes under the Gall-Peters projection. Gall-Peters is an equal area projection, which means the area of each region in the map is preserved accurately. With Gall-Peters, Africa takes center stage and Europe is just a tiny place off on the margin.

In the 1970’s, there was a movement to make Gall-Peters the “standard” map, a less-deceptive alternative to replace Mercator. Though clearly it never caught on.

As with all map projections, Gall-Peters trades accuracy in one property at the expense of distorting other properties. Namely, it is accurate in terms of size, but very inaccurate in terms of shapes. Notice how the countries in the center are tall and elongated whereas those at the top and bottom of the map are flat and wide. Gall-Peters may get the size of Greenland correct, but when viewed from above in real life, Greenland’s true shape is much closer to what the Mercator projection shows.

There is also another point supporting the view that Mercator is culturally biased. Often the top and bottom of the map are clipped unevenly, giving more space to the northern hemisphere and putting Europe and the U.S. closer to the center.

The one shown in this post comes from the North Dakota Historical Society. The equator was added by me to show how far off center it is.

So, is the Mercator map projection racist as some claim?

Clearly the answer is no.

Mercator was created for very practical reasons, not to denigrate a particular race. More importantly, when countries favor policies that promote their own importance and their national interests, that’s called nationalism. And it would be strange indeed to find a country that does not (see, for example, these Pacifc Ocean centered world maps from Japan, China, and North Korea)

That being said, the Mercator projection is still probably not the best choice for a standard world map.

Comparing these and other map projections

Mercator and Gall-Peters are two of the most well-known map projections, but there are thousands of others, each with its own strengths and weaknesses according to the purpose for which it is intended.

The purple circles overlaid on top of the map are known as Tissot’s indicatrices. They are there to help illustrate how and where each projection distorts the map.

For mobile browsers, tap the image below for a full screen graphic comparing these map projections. 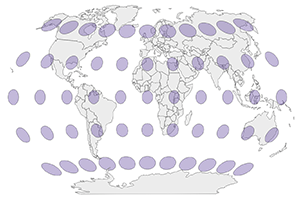 To see how the Mercator projection distorts certain countries compared to others, have a look at The True Size Of, an interactive map that lets you drag a country around the world map and see how its true size compares to other countries.

The West Wing has a great clip explaining the Mercator vs Gall-Peters controversy.

Also, find out from XKCD what your favorite map projection says about you.