Several people thought the map would be more meaningful if it were done as an equal area projection.

For non-map geeks, an equal area projection is a way of stretching the map so that the area of every object is proportional to its area in real life. More below.

A few people also pointed out that the colored areas of the map were chosen arbitrarily, which is true.

To build the map, I manually chose territories so as to make the blue area large, and the red area small.

I don’t see anything inherently wrong with constructing the map that way, but it had me wondering what the map would look like if it was created in a non-arbitrary way.

What are the biggest and the smallest possible areas that contain exactly 5% of the world population?

To answer this question, I looked to NASA’s gridded population data, which is something like a high resolution zoom for world population.

With it, I calculated the largest possible blue area and the smallest possible red area, subject to the constraint that each area contain exactly 5% of the world population. Here is what they look like. 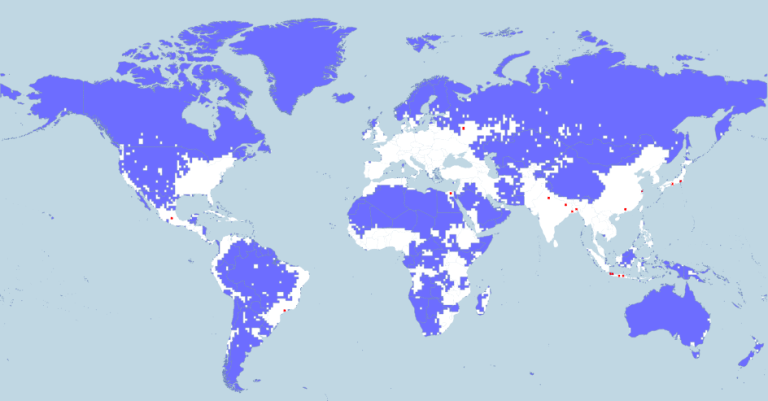 There are 17 red dots in the map. Can you find them? Can you guess which dot has the highest population density?

Since the world is spherical, it is impossible to draw it on a flat surface without distorting it in some way.

The prior map does so using a Mercator projection (technically, a modified version called a Miller projection). It is the world map that most of us are used to seeing, but it drastically distorts the size of objects as they approach the poles. For example, it makes Greenland appear almost same size as South America. In reality, Greenland is about ten times smaller!

Here is what the same map looks like using a Gall-Peters projection, which preserves the relative size of objects.

Notice how much smaller Greenland is compared to South America. These are their true sizes.

The shape of Greenland is also very different. It is now much shorter and flatter, which is not what Greenland really looks like.

Compare the map with this image from NASA.

Here is what the original map looks like using Gall-Peters. 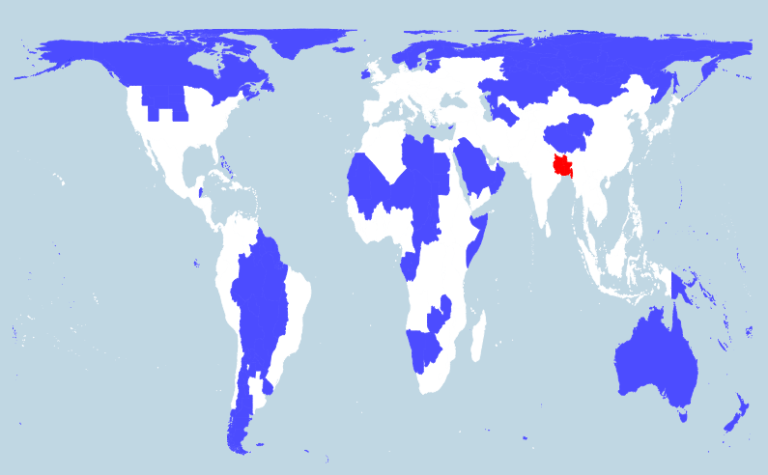 In a technical sense, the Gall-Peters projection is probably a more correct way of showing the world in this case, since it accurately depicts the relative areas of the different regions.

But when you first looked at this map, what is the first thing that jumped out at you?

Was it the colored regions that first caught your attention? Or was it the simple fact that the world looks weird?

The purpose of this map is to communicate a fact about population density. So why confuse things by throwing in a world map that most people have never seen?

I am probably in the minority among map geeks, but I think the Mercator projection is usually the better map to go with because everyone has a frame of reference for interpreting it.

If technical correctness were truly the most important thing, we should really be using an interrupted projection, which is more accurate for both the size and the shape of objects.

This clip from The West Wing sums up the issue pretty well.