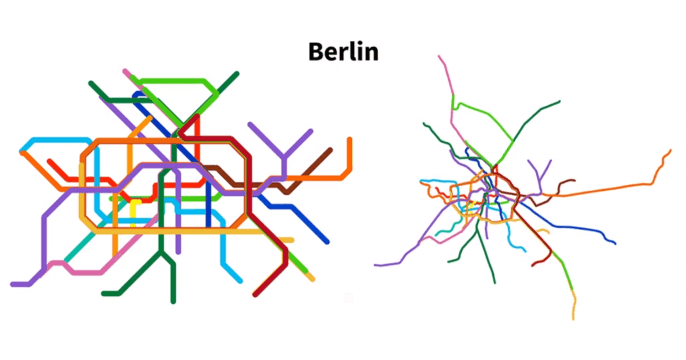 Public transit maps occupy a unique place in the mapping world. Unlike most maps, which are designed to satisfy a single purpose, transit maps must strike a careful balance between readability, detail, and aesthetic design. To that end, they necessarily distort the city’s true geography (and with it, our own mental conception of the city too).

Just how distorted are the world’s metro maps? A recent series of animated graphics, created by the DIY cartographers of reddit, answers that question in mesmerizing fashion. Scroll down to see the metro maps of seven global cities transform to match their true geography.

As is the case with most metro maps, London’s iconic Tube map exaggerates the size of the city center, while shortening and simplifying the lines radiating out toward its periphery. The prominent region enclosed by the Circle Line (the bottle-shaped loop in the center) occupies about 6% of the Tube map’s total area. In reality, it is only about one-quarter that size. London’s “Square Mile” (the neck of the bottle) is only about one-sixth as large as it appears on the map.

Berlin’s public transit map, which looks strikingly similar to London’s, undergoes a similar transformation. The loop enclosing the city center shrinks down to a fraction of its former size, while the routes leading to the Berlin’s outskirts morph from short, straight lines to elongated, curvy paths.

This one was my contribution to the series. It begins with a geometric variation of the Paris Metro map, rather than the standard map familiar to Parisians. As it transforms, the map resembles a multi-limbed creature giving its legs a good stretch, albeit not to the degree of its London and Berlin counterparts.

To get an idea of scale, here is what it looks like over a map of Paris neighborhoods. Also, here is my original HTML version, which let’s you transform the map yourself.

New York’s islands and rivers constrain the design of its subway map, allowing for only so much distortion while remaining consistent with the city’s geographic features. Hence, compared to other cities’ transit maps, the New York subway map is largely true to reality. The most apparent difference is the “fattening-out” of Manhattan, without which the dense network of subway lines that traverse its length would be almost unreadable.

Philadelphia boasts a surprisingly diverse transit system that includes a mix of commuter rail, rapid transit and trolleys, all of which make stops both above and below ground as they pass through the city center. The difference in scale between the commuter rail (grey lines) and the other transit systems is not apparent on the official map, but becomes clear in the geographically accurate version.

One of the most complex transit systems in the world, serving the world’s most populous city, Toyko’s metro map undergoes a drastic transformation in both size and shape. Take, for example, the Oedo Line (the large purple loop), which appears to travel in a straight line along its southern stretch. As the map transforms, the line curls up into a pronounced, upward-facing loop.

This map of Hong Kong’s Mass Transit Railway is my personal favorite of the group. With the shape of the islands in the background, it gives the clearest picture of how Hong Kong’s transit map distortions compare to the geography of the city.

These maps are just seven examples from a much larger series posted on reddit over the last few weeks, including: Sao Paulo, Barcelona, Washington D.C. Montreal, Vienna, Guangzhou, Oslo, and many others. You can find the rest of the collection by searching here.

If you’re up for a challenge, see if you can identify these world cities from their ‘naked’ metro maps.