When you think of government websites, cutting edge technology and beautiful design are probably not the first things that come to mind. More likely, your stereotype is closer to HealthCare.gov, HHS‘s Obamacare marketplace, which failed to work at launch. Or sam.gov, GSA‘s buggy government procurement site with a $181 million price tag.

For FOIA Mapper, I spend a lot of time digging around .gov sites, and unfortunately the stereotype is pretty accurate. Nearly all .gov sites are difficult to navigate and not particularly pretty to look at. There is, however, one big exception, one government agency whose website and other creative work regularly wins it lots of awards.

I’m talking, of course, about NASA.

From their sleek, well-designed website to their beautiful HD space footage, nearly everything NASA produces is outstanding. And their data visualization work is no exception.

There are countless great examples on the NASA website, but here are a few of my favorites. Most are HD video, best viewed on a desktop computer in full screen.

The two videos below are based NASA’s “Nature Run” simulation by its GEOS-5 system, an atmosphere and surface temperature model developed by NASA’s Goddard Space Flight Center.

This first one displays a simluation of atmospheric aerosols on a rotating globe (aerosol refers not to the ozone-depleting chemicals from pressurized cans, but to dust, water vapor, and other particles suspended in the air).

Red-yellow dots represent smoke from wildfires and other human-initiated burning, as detected by NASA satellites.

The decline of Arctic sea ice

This video shows, both visually and numerically, how much the Arctic sea ice has declined since 1980.

If the trend continues, here is another video showing what the Earth could look like by 3000 AD.

The map displays global sea surface currents over the course of one year. The color corresponds to ocean temperature.

The greening of Canada and Alaska

This animation displays the growth in vegetation over Canada and Alaska between 1984 and 2012.

The colors correspond to the change in vegetation (not to the amount of vegetation itself). Greener = more vegetation growth.

Air quality improvements across the U.S.

These maps show how air quality has improved across the contiguous United States since 2005. You can find images for other regions of the world on the NASA website.

The sun’s relationship with Earth

This video is a Vizzie-winning excerpt from Dynamic Earth: Exploring Earth’s Climate Engine, a 24-minute presentation that examines the inner workings of Earth’s climate system.

To give full credit where it’s due, Dynamic Earth is a joint production of NASA’s Scientific Visualization Studio, Spitz Creative Media, the National Center for Supercomputing Applications at the University of Illinois, the Denver Museum of Nature & Science, and Thomas Lucas Productions. Trailers for the full-length presentation can be found here. 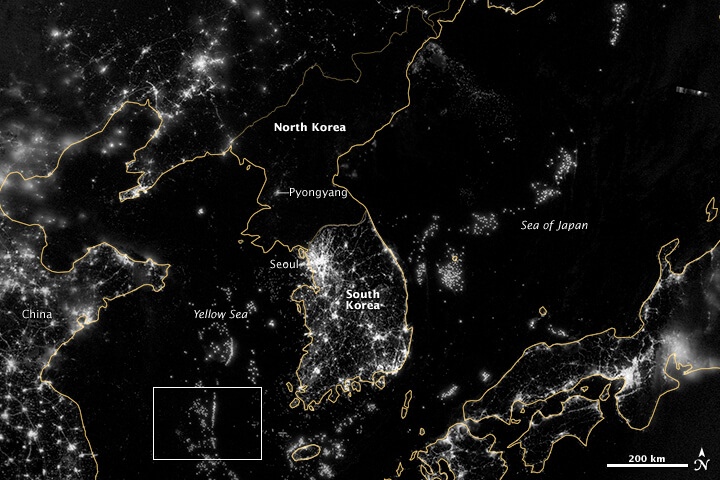 This nighttime shot of the Korean Peninsula was captured by NASA’s Suomi NPP satellite. The contrast between the two areas is striking. South Korea is gleaming with light while North Korea is almost black aside from a faint glimmer around Pyongyang.

It’s a stretch to call this one a data visualization. But it’s such an incredible image (and it is downloadable as data), I thought it deserved to be included.

In addition to what’s shown above, NASA has many other great data visualizations on its website. Here are a few that I thought were worth a mention.

For an example of some noteworthy government content of a very different type, see this gallery of weapons the TSA confiscated from U.S. airports.