Property values across the U.S.

The graphic below shows how the 50 states compare in terms of total property value.

The map on the right is a cartogram – the land area of each state has been substituted for its total property value.

Hover over the maps to bring up more information.

Property value in the U.S. is very concentrated. About half of the total value comes from the top five states: California, New York, Florida, Texas, and Pennsylvania, respectively.

No surprise the densest concentration of property value is around Central Park.

Considering how tiny the Upper East Side actually is (that small strip to the right of Central Park), it is pretty striking to see how large it becomes in the second map.

Putting the two pieces together, the graphic below shows how New York City’s property values compare to those of the states.
Hover over the map or the names in the margins to bring up information about a location.

A few of the things that jumped out at me:

As far as I am aware, this is the first reasonably accurate estimate of neighborhood and city-wide property values in New York City.

Because of an odd idiosyncrasy in the New York City property tax system, the “market values” that the City assigns to real estate are not market values at all. For condos and coops, these values are generated by an antiquated pricing model, which underestimates true property values by as much as 95%.

An extreme example is this $100m penthouse, the most expensive sale ever in NYC. Despite having been purchased just six months ago, its official “market value” is reported as only $6m.

This use of the term “market value” has understandably led to some confusion, and these figures often get erroneously used as estimates of actual property value, such as in this Wikipedia entry.

The New York City property values are based on actual sale prices from 2014. Property value estimates for the rest of the U.S. are based on the Lincoln Institute’s Land Prices by State and information from the Census (or more precisely, from the Minnesota Population Center)

The NYC Department of Finance releases an annual report containing estimated “market values” for every piece of real estate in the City. To estimate the amount by which these valuations underestimate the true property values, I compared them against actual sale prices from 2014.

After segmenting by property type and sale price, I calculated the average ratio of market value to actual sale price for each group. The results are in the chart above.

Applying those same ratios to every residential property in New York City, here is how the aggregate values come out, as compared with the 2014 market values from the Dept of Finance. 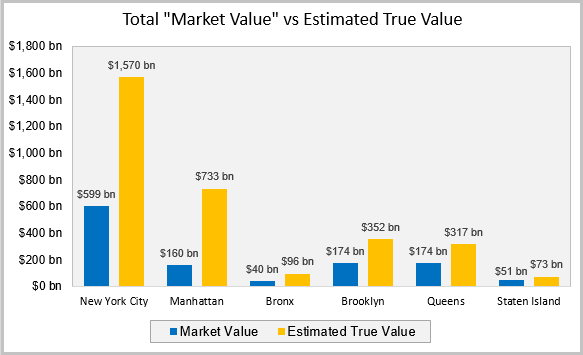 There are many other consequences of New York City’s strange property valuation system.

Update 7/9/2015: I have since created another cartogram, animated, that displays New York City’s total property value in comparison to other counties (created using Carto3F, among other tools).