The interactive map below shows the location of 57,000 addresses to come out of the latest Panama Papers data dump. Each address is associated with one or more of the offshore entities (blue circles), named officers (red circles), or intermediaries (green circles) to be listed in the release.

Select a marker to see who or what from the Panama Papers / Offshore leaks database is linked to that address, as well as other countries they are associated with.

From the International Consortium of Investigative Journalists:

There are legitimate uses for offshore companies and trusts. We do not intend to suggest or imply that any persons, companies or other entities included in the ICIJ Offshore Leaks Database have broken the law or otherwise acted improperly. Many people and entities have the same or similar names. We suggest you confirm the identities of any individuals or entities located in the database based on addresses or other identifiable information. If you find an error in the database please get in touch with us.

Kudos to the ICIJ for all the work it must have taken to extract all the information for their latest release. On their website, it mentions that their database contains information about 300k+ offshore entities. But that’s being quite modest. When you include all of the associated people, places, intermediaries, and information about the connections between them, the database amounts to about 2 million records. Putting it all together must have been an enormous undertaking.

That being the case, it is pretty understandable that the data formatting is a little messy. And if you spend some time going through it, you will find errors. I make no representations to the accuracy of any of the information shown here.

What this map shows

The map shows addresses that are connected to either officers, entities, or intermediaries. Here is how the ICIJ defines them, from their FAQ page:

In case the map above is not large enough to get a full view of the world, here is how it looks. 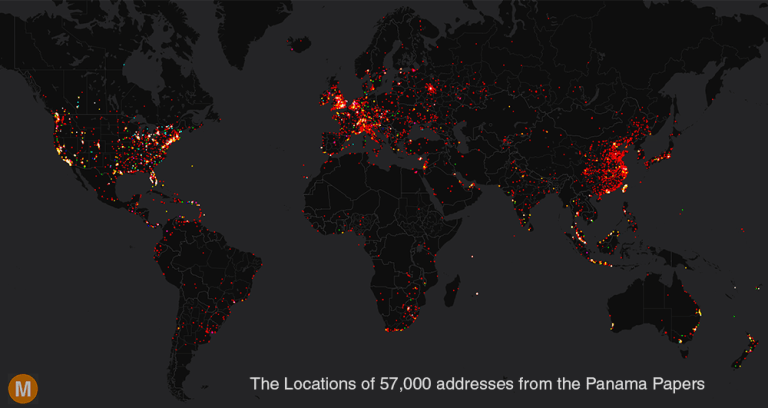 The addresses are heavily concentrated in Europe and the United States, which is not really surprising since the E.U. and U.S. together control about half the world’s money.

More interesting is the concentration in China, which is noticeably different in color. The dots in Europe and the U.S. are multicolored, whereas those is China are predominantly red, representing the location of officers (as opposed to entities or intermediaries).

42% of the named officers in the Offshore Leaks database are from China, Hong Kong, or Taiwan

These charts show the breakdown by country for the three types of addresses shown in the map: officers, entities, and intermediaries. 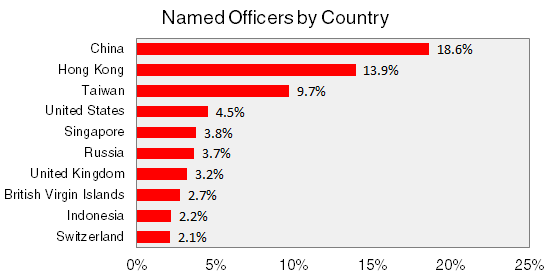 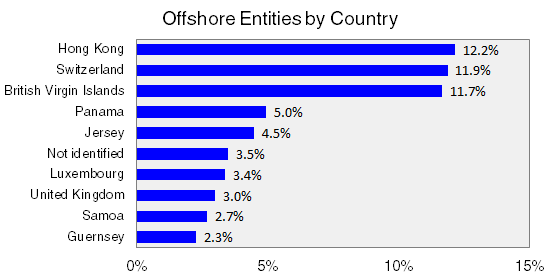 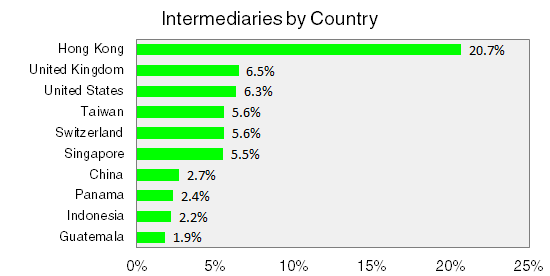 If you count Hong Kong and Taiwan as part of China, as most countries officially recognize them, then China accounts for a full 42% of the named officers: the people directly associated with the offshore entities.

Since Hong Kong and Taiwan are so small, it’s hard to appreciate in the map above just how dense they actually are. Here they are zoomed in, alongside New York and London for comparison. All four of these images are at the same zoom level. 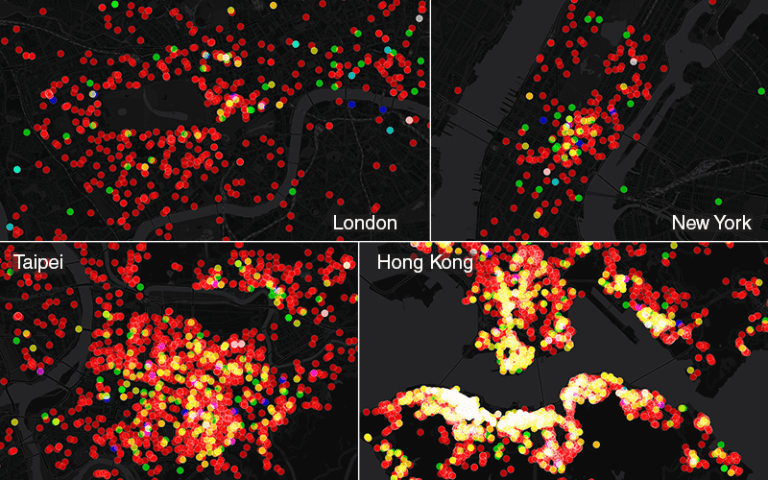 If you’d like to dig deeper into the data, head over to the ICIJ website and try out their Offshore Leaks search tool. It allows you to search the database by keyword, country, or jurisdiction. The site also has an interactive graphic that allows you to explore the connections between people, places, and offshore entities.

You can also download the database in its entirety.

How the locations were determined

To determine the locations shown in the map, I took the roughly 150,000 addresses that are in the Panama Papers database, and after a bit of reformatting, I ran them through the Google and OpenStreetMap geocoding APIs, which take addresses as input and give back geographic coordinates. After discarding the ones that weren’t found by the APIs and those whose coordinates were clearly wrong, I was left with the 57,000 shown in the map.

To make the map, I used CartoDB / cartodb.js.

If you liked this map, sign up to be notified of new Metrocosm posts