The other day, I came across an article about Jeff Smith, a former Missouri state senator who was recently released from a 1-year stint in federal prison. Years earlier during a failed congressional run, Smith’s campaign violated election law by sending out anonymous postcards attacking his political opponent. When the violation surfaced years later, Smith was caught on tape conspiring to cover it up.

Not to make light of election law, but a year in prison for conspiracy to cover up postcards? Even if the punishment were fair to Smith and his family, is prison really the best use of tax dollars? Each federal inmate costs tax payers about $29,000 a year. Wouldn’t a suspension from elected office and a monetary fine have been a more suitable punishment?

It all got me to wondering about the U.S. incarceration system. It’s well known that the U.S. locks up a larger share of its population than most other countries, but just how much more?

The U.S. prison population is 3x the size of all other developed countries combined

This map shows the prison populations in the world’s 42 advanced economies (as defined by the C.I.A. World Factbook). 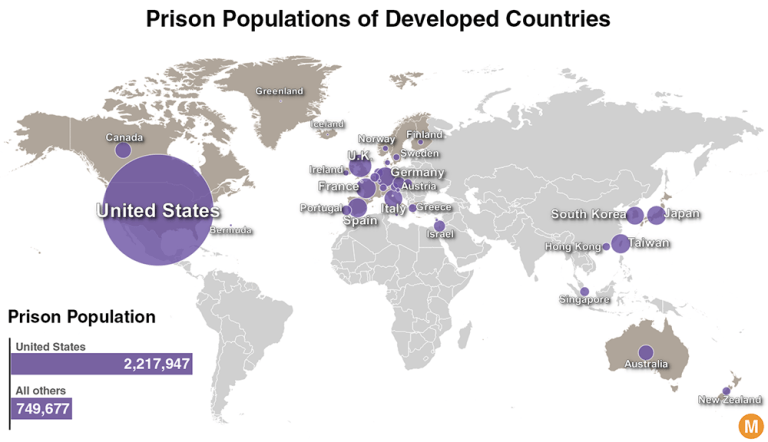 Click on the image to view the map in higher resolution

As the map above shows, the U.S. has over 3x as many prisoners as the rest of the world’s advanced economies combined. And the picture looks even more extreme when you factor in population size.

The 42 countries shown in the map have a combined population of just over 1 billion, of which the U.S. makes up about one-third. That puts the United States’ incarceration rate over 6x as high as the rest of the developed world. No other advanced economy even comes close.

Prison populations and incarceration rates around the world

The U.S. has a much higher incarceration rate than other developed counties, but how does it stack up globally?

Worldwide, the United States’ prison population of 2.2 million is higher than any other country. China is a not-too-distant second with 1.6 million prisoners. After that, no other country is even in the ballpark.

If you’d like go through the data yourself, click the link below to expand a table showing prison population figures for all countries, data courtesy of World Prison Brief.

Not much, if at all.

That’s the finding of a report released last year by the NYU Brennan Center. The study concluded that in general, higher incarceration rates do reduce crime, but the effect is diminishing.

For violent crime, the report found that higher incarceration had no observable effect in the 1990’s or in the 2000’s.

How do these findings from the Brennan Center compare with the results of other studies?

The findings are consistent. The rise in incarceration during the 2000’s did little if anything to prevent crime.

However prison is not just about crime deterrence. It serves other purposes as well, such as rehabilitation.

Here are some statistics on recidivism, relapse into criminal behavior, from the Bureau of Justice.

Why do so many former prisoners return to crime?

One obvious contributor is the difficulty in finding a job for someone with a criminal record. Often employers will ask about criminal history in a pre-employment screener, effectively disqualifying them from the start. Alhough doing so is now banned in some states.

A less well known cause are the fees that are often assessed against convicted criminals related to their incarceration, known as legal financial obligations, which compound their financial struggles upon release. Former inmates may leave prison owing $10’s of thousands to the state, with the threat of being sent back to prison if they don’t pay.

If the goal of rehabilitating prisoners is to prevent them from returning to a life of crime, releasing them deep in debt and poorly equipped to find a job hardly seems like smart policy.

Not only do the United States’ high incarceration rates not deter crime or rehabilitate prisoners, they are also very expensive. The corrections system costs nearly $80 billion a year in federal, state, and local tax dollars. It would seem the system is not only inhumane, it is also bad economic policy.

Without speculating about the causes behind America’s rising incarceration, it’s still interesting to look at who’s incentives the system serves.

One group that clearly benefits from more imprisonment are companies that operate private prisons.

As reported by ProPublica, there are currently about 130 private prisons in the U.S., which house about 157,000 prisoners. That’s a small percentage of the country’s total prison population, but it’s still big business. The two largest private prison companies, Corrections Corporation of America and GEO Group, generated a combined revenue of $3.3 billion in 2010.

According to the Washington Post, the two companies have spend $25 million in lobbying dollars since 1989 and an additional $10 million on campaign contributions.

A while back, a friend of mine mentioned a company that holds a monopoly on the prison commissary supply market, a company he claimed was owned by the Bush Family.

The company is called Keefe Commissary. It’s not clear to me whether the Bush association is true or just a rumor, but a search in Google does turn up some red flags about the company’s pricing:

Comment from discussion IAMA 26 year old male who just spend two months in the maximum security section of the county jail. I was among those accused of murder and some pretty heinous crimes – some facing the death penalty. AMA.

Keefe’s commissary prices are available for many prisons on the Bureau of Prisons website. A quick spot check backs up the claim that their ramen noodles are indeed overpriced.