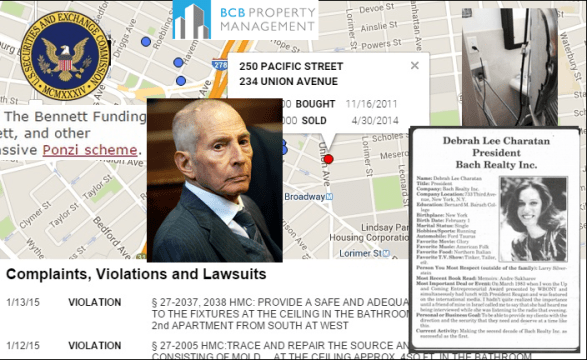 In case you needed another reason to dislike Robert Durst, he is not only [allegedly] a murderous and animal-decapitating sociopath, he is also a slumlord.

Though Durst’s name appears on very few NYC real estate transactions over the past decade, he has reportedly been busy buying and selling via BCB Property Management, a business founded in 2008 by his second wife, Debrah Charatan (more below).

Based on public records from various City agencies, here is what emerges:

Click on a building to view purchase and sale information, as well as a list of complaints, violations, and lawsuits involving the property.

BCB’s current portfolio is comprised of at least 33 properties, which were purchased for a combined price of $360M.

BCB has also “flipped” an additional 33 properties, purchasing them for a combined price of $83M and selling them for $164M, netting a profit of $81M and a return on investment of nearly 100%.

These numbers do not account for acquisition costs, transfer tax, renovation costs, etc.  But in any case, BCB looks to have made a extremely high return.  What was their strategy?

Prior to acquisition, a typical BCB Property is undermanaged with ample upside. Through a combination of efficient management, construction prowess, upstanding principals, and a keen eye for value, BCB prides itself on uncovering unique acquisition opportunities.

At least the first sentence is accurate.  All of BCB’s purchases look to have been rent stabilized buildings that were in pretty bad shape at the time of acquisition.

Unfortunately, if the tenants were expecting conditions to improve under BCB ownership, they were likely disappointed.

As landlord, BCB has racked up over 200 housing maintenance complaints and more than 800 violations, and was named in at least 16 housing-related court cases, 8 of which were brought by the City’s Housing Ligation Division. Some examples from the text of the complaints:

“I want to report the only elevator in the residential building is not work[ing] and has not been for almost a month.”
– 1059 Union Street

Consistent with news reports and court records (e.g. rent overcharge lawsuit) , it seems BCB uses a predatory strategy that is unfortunately very common: buy a dilapidated rent-stabilized building, drive the tenants out, and renovate the units with a view to re-leasing them at a much higher rate.

Landlords harassing rent-stabilized tenants is nothing new, and the motivation is obvious. Though until going through these numbers, I had not appreciated just how profitable it was.

How much involvement did Durst himself have in these transactions?

Other than one 2012 sale in which his name appears, buying two buildings from BCB / Charatan, with BCB sustaining a $5M loss, Durst’s name does not show up in any of these transactions. Here is the relevant historical timeline as reported by Newsweek:

Other bizarre records: “Woof Woof”, mortgages in Yonkers, a ponzi scheme,  and a love triangle

Searching for this information about BCB also turned up some other records that I thought were too strange not to include.

Although she only appears in The Jinx for brief moments, Debrah Charatan may be the biggest mystery in this whole story.

12-Apr Update: I have received a lot of great responses on Twitter. Here are a few:

Sign up to have new Metrocosm posts delivered to your inbox