Only 5% of the world’s population lives in the entire blue region. For comparison, the same number of people live in the small red region. 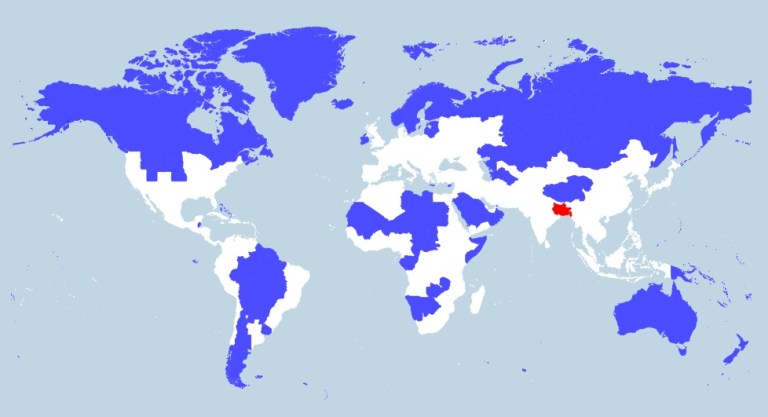 Update: What this map looks like as an equal area projection, and why it would have been a poor choice

Believe it or not, it’s true. There are just as many people living in the small red area as there are living in all the blue areas combined.

This is a modified version of a map from reddit user Ibisdigitalmedia. When I first came across the original map, via the awesome Twitter feed of @NinjaEconomics, I was skeptical, so I went through and checked the numbers.

The original map turned out not to be entirely correct (the red region covered only about 3% of the world population), so I made this one from scratch based on the same concept.

Can you identify the two countries within the red region?

The table below shows the full list of territories covered by each region, along with their 2014 populations.

For a related post, see: How Many U.S. Cities Can You Fit Inside Greater Tokyo?

For it’s size, Tokyo has the highest population density in the world.

Sign up to have new Metrocosm posts delivered to your inbox

If you want to work through the data yourself, you can download it here in CSV format.