Home » Cartography » Ever sat on a beach and wondered what’s across the ocean? It may not be what you think.

Have you ever sat on a beach and wondered what’s across the ocean?

If you think you can figure out the answer just by looking at a map, read on. You may be surprised. I was. 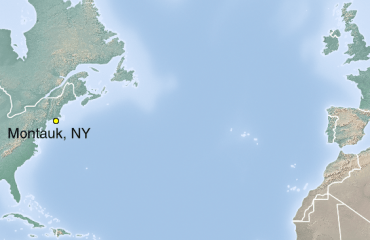 To ask the question more concretely, what’s across the ocean from New York?

It doesn’t really matter which beach in New York you choose. The results come out the same anywhere. But since I needed a specific point to plot on the map, I went with Montauk, NY. It’s at the tip of Long Island and has a clear, unobstructed view of the Atlantic ocean.

To figure out what’s across from New York (Montauk), the first thing you might do is take out a map, follow a straight line eastward, and conclude that the answer is Europe, or more precisely Portugal.

Of course there is not just one answer. When looking out across the ocean, there are many directions you could choose, each of which would lead you to a different location. But in this case, surprisingly, Portugal is not one of them. 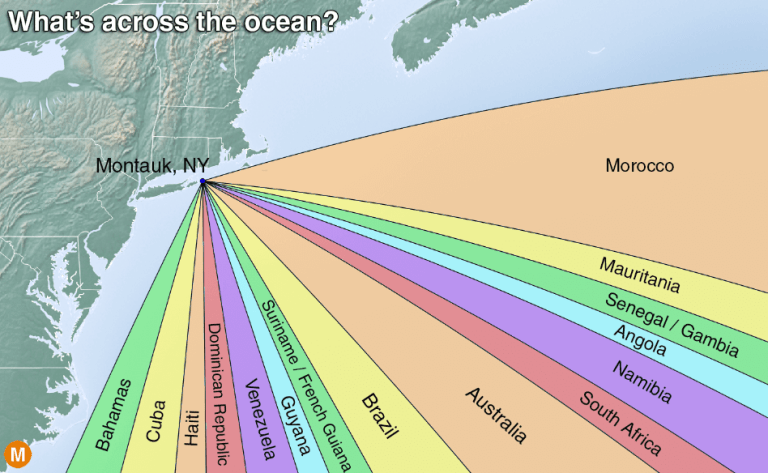 When you look across the ocean from a beach in Montauk, or anywhere in New York, this map shows what’s on the other side (excluding some smaller countries that unfortunately did not fit).

No matter which direction you look, you’re not facing Europe.

That’s partly because the coast of Long Island is angled southward. But there is also something else going on. 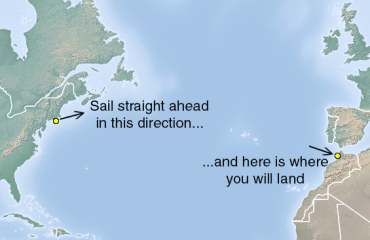 If you stand on the beach and turn your head all the way to the left, the direction you’re facing is northeast. Common sense would seem to dictate if you sail in that direction (northeast), you should end up north east of where you began. Namely, you should end up in Europe.

In reality, if you were to point your ship northeast from New York and sail straight ahead without turning, you would land in Morocco, which is to the south of New York.

Here’s the part that had me scratching my head. When you stand on a beach in New York, one of the countries directly across from you is Australia.

If you were to sail through the orange Australia section in the map above, without ever turning the ship, you would eventually hit Australia’s southwestern coast. And as you land, you would be approaching from the south.

Sailing from New York to Australia in a straight line

Because we’re used to looking at the world on a flat surface, our perception of Earth’s geography is distorted in many ways. In this case, it is the concept of straight lines that throws us off.

Technically, there are no straight lines on a globe, since the surface itself is curved. The shortest distance between any two points, the closest thing to a straight line, is known as a great circle arc.

Over short distances, straight lines on a 2-dimensional map are the same as great circle arcs on a 3-dimensional globe. But over long distances, the relationship breaks down as the Earth’s curvature comes into play. something you probably already know if you’ve ever seen the curved path of a long international flight.

The shortest distance between two points on the Earth’s surface can look curved when viewed on a 2-dimensional map. 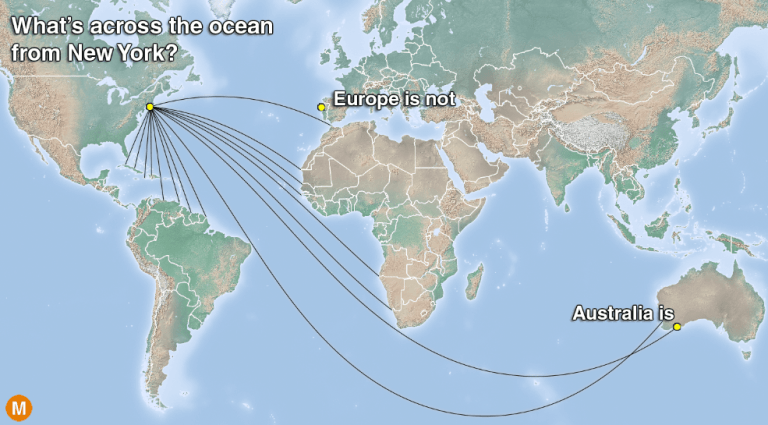 Though the lines in the map above appear curved, all of them are actually straight lines (great circles) on the 3D globe.

From a different perspective

If you have any doubt whether it’s possible to sail from New York to Australia along a straight line, here is what it looks like in 3 dimensions.

There is also a 2-dimensional way of looking at these lines that clears up what’s really going on. The image below shows the Earth from a top-down perspective, using an azimuthal map projection, with New York in the center. 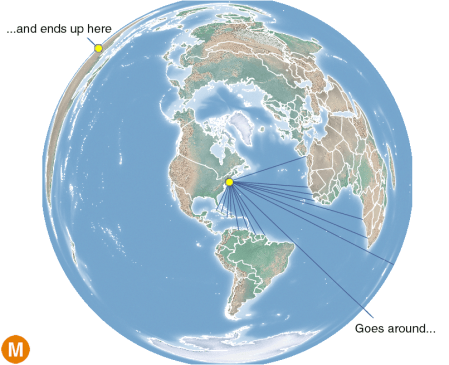 From this view, you can see the lines do appear straight.

You can also see clearly that the U.S. East Coast as a whole does not face toward Europe at all.

Finally, here are the lines on an interactive globe, which you can play around with yourself. Press the mesh globe button at the top to switch to a 2-dimensional view.

View a full screen version of this globe.

Sailing east from New York and continuing straight ahead will not take you to Europe. If you’re still not convinced, look at the line at the top that runs between New York and northern Morocco and convince yourself it is straight. Now drag New York to the center, and notice what direction the line is going as it leaves New York (north east). Now imagine what direction a straight line to Europe would be going.

Europe is at the same latitude as New York, so if you keep your ship traveling east the whole time you will arrive in Europe. But doing so would require making constant turns along the way. Why? Because meridians of latitude themselves are curved.

What’s really across the Atlantic ocean?

There are many ways of looking at the question and no single right answer. But if you were to stand on a beach on the U.S. East Coast and look toward the east, here is what’s directly across from you. 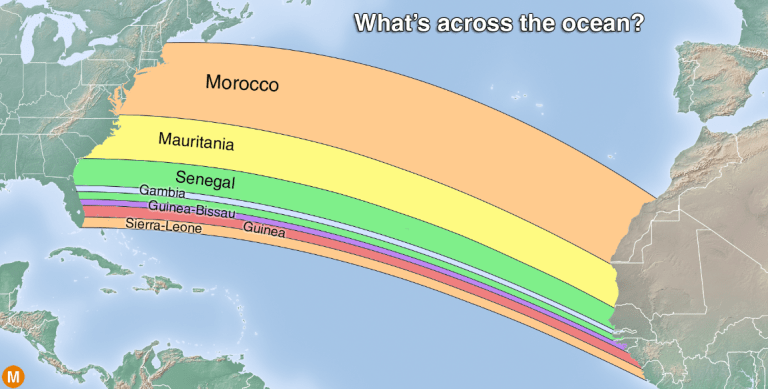