As the largest city in the world’s most wasteful country, New York generates over 14 million tons of trash each year, more than any other city in the world. Not only that, New York is also America’s densest city. Its narrow, heavily-trafficked streets make collecting all that garbage a logistical Gordian knot. Lastly, New York is located smack dab in the center of the Northeast megalopolis, a giant urban expanse where available land for disposing of garbage is in short supply.

To deal with these challenges, New York relies on a complex waste-management ecosystem encompassing: 2 city agencies, 3 modes of transport (trucks, trains, and barges), 1,668 city collection trucks, an additional 248 private waste hauling companies, and a diverse network of temporary and permanent facilities extending halfway around the world.

Waste management problems are nothing new for New York. As described in a 1657 ordinance, when New York was still called New Amsterdam,

“…many burghers and inhabitants throw their rubbish, filth, ashes, dead animals and suchlike things into the public streets to the great inconvenience of the community.”

A snapshot from two centuries later depicts a city overrun with horse manure, posing a health hazard for residents.

Through most of its history, up until the mid-1900’s, New York’s primary method for disposing of its waste was simply to dump it into the ocean. At one point, as much as 80% of New York’s garbage ended up out at sea. However, in what was surely its most enduring waste management initiative, New York City used some of its garbage (mostly ash, rubble, and other debris) to create artificial land, thereby increasing its own size.

Much of its land today, including some of its priciest neighborhoods, are literally built on garbage. 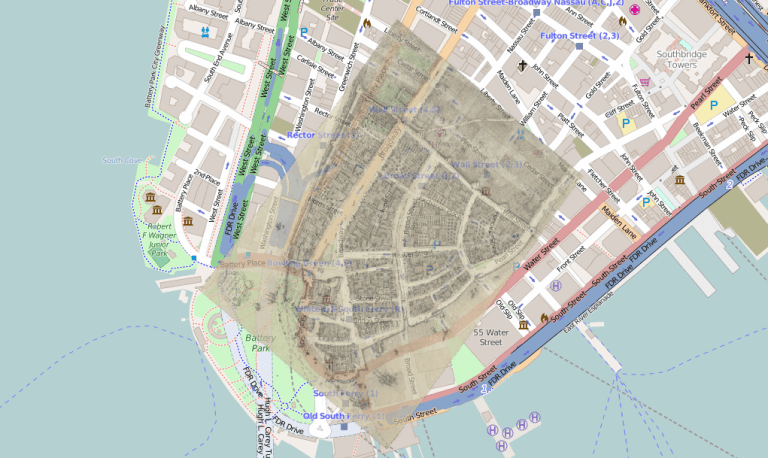 A 1660 map of lower Manhattan overlaid on a current map shows how much of the land is manmade, built on top of the City’s own garbage.

The stories behind New York’s madmade land are a long, fascinating story in and of themselves. A few of my favorites are highlighted below. 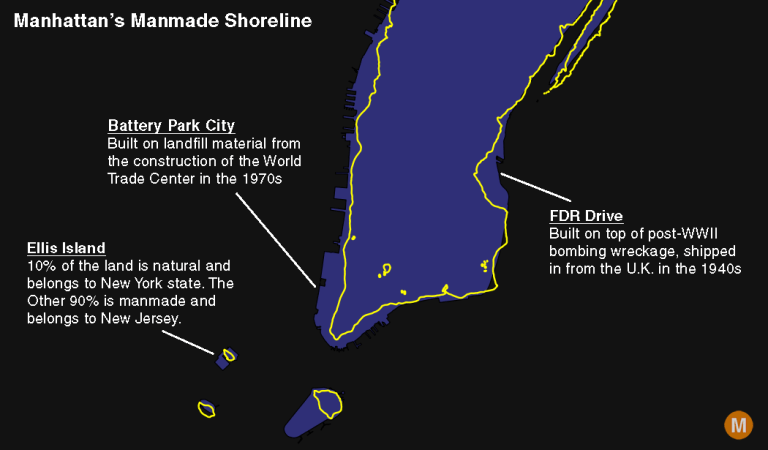 Today, New York City generates over 14 million tons of trash each year. The amount is so large, the City manages it through two separate systems, one public and one private.

The public system handles waste from residences and government buildings as well as some non-profits. This “public waste,” which accounts for about one-quarter of the City’s total, is collected by New York’s Department of Sanitation (DSNY), the largest waste management agency in the world with an annual budget of $1.5 billion, greater than the total annual budget of 41 countries.

The other three-quarters of New York’s garbage is generated by commercial businesses, most of it rubble and debris from construction projects. Collection of this “private waste” does not come out of the City’s budget. Instead, business must pay one of the City’s 248 licensed waste haulers to take it away.

Before the trash goes out to the curb for pickup, New York law requires it be separated into three categories: paper, metal/glass/plastic, or mixed solid waste (non-recyclable garbage). Each type of waste is typically collected separately and follows a different path to its ultimate destination, often with several intermediate stops along the way. 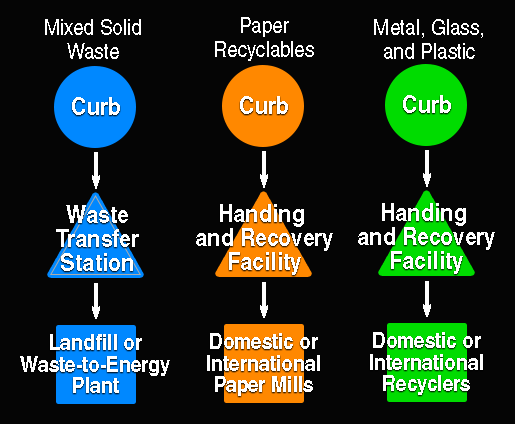 Each day, New York’s public garbage trucks collect nearly 7,000 tons of residential mixed solid waste. After finishing their routes, most of these trucks will deposit the garbage in one of New York’s waste transfer stations located throughout the City. From there, the garbage will eventually be loaded onto a barge or a train and carried as far as 600 miles away to its final stop. For most of New York’s mixed solid waste (about 80% of it by tonnage), this last stop will be a landfill. The remaining 20% will end up at a waste-to-energy plant, where it will be incinerated and converted into energy.

Paper and metal/glass/plastic waste is brought to one of the City’s recyclables handling and recovery facilities, specialized plants that separate and sort the recyclable materials. From this point, the journey of New York’s recyclable waste splits apart into many possible directions. Some of it will be sold to local raw material processors (paper mills, smelters, etc). Some will be exported overseas, most often to China or India. Some will be sold through intermediary waste brokers. And some specific items will be separated and sold directly to their end-users (e.g. crates to a Coca-Cola bottling plant, beer kegs to Anheiser-Busch).
New York’s solid waste management facilities are required to submit annual reports documenting the source and destination of all incoming and outgoing waste material. Using this data, it’s possible to construct a reasonably comprehensive picture of the journey taken by New York’s garbage.

The map at the top is based on data from 2015. Press the play button to see where New York’s waste goes, starting in the local community district where it originates, on to a temporary transfer station or recyclables recovery facility, and in many cases all the way to its final destination (the paper trail gets spotty after the waste leaves New York). Click on a marker to see the amount of waste that passed through that location in 2015.

This article originally appeared on The Guardian Cities