Home » Population » World Population: The fall of Asia and the rise of Africa

* 2100 population figures are projections from the UN’s Population Division

For thousands of years, Asia has been the population center of the world. But that’s about to change.

Asia contains 7 of the 10 most populous countries in the world, the two largest of which, China and India, each individually have larger populations than Africa, Europe, or the Americas. And as I’ve demonstrated previously, the eye-popping population density in regions such as Tokyo and Bangladesh is an order of magnitude greater than anywhere in the western world.

Two hundred years ago, the figures were even more extreme. In 1800, nearly two thirds of the world lived in Asia. And at that time China had a larger population than Africa, Europe, and the Americas combined.

Asia dominates the world population landscape, and it has for at least the last two and a half thousand years. As shown in the chart below, the relative population sizes of Asia, Africa, and Europe have remained surprisingly constant for thousands of years. Since at least 400 BC, 60% or more of the world has lived in Asia.

By 2100, the population of Africa is expected to catch up with Asia.

According to the U.N. Population Division, the population of Africa is poised to explode during the next 85 years, quadrupling in size by 2100.

The U.N. attributes this change to two factors: Africa’s high fertility rates (African women have on average 4.7 children vs. a global average of 2.5) and its young population, many of whom will be reaching adulthood in the coming years and having children of their own.

In order to account for uncertainties in estimating future fertility rates, the U.N. produces a range of population projections using different assumptions. The low and high fertility variants, as shown in the graph below, represent a 95% confidence interval. That is to say, the U.N. believes that there is a 95% probability that each region’s true population in 2100 will be somewhere between the low and high estimates.

Click on the circles to see the U.N.’s high, low, and medium population projections

What I find most striking about this graph is not so much the size of the populations in 2100, but the rates of growth. While the populations of Asia, Europe, and the Americas are likely to have leveled out or be shrinking by 2100, Africa’s will be growing strong.

If U.N. estimates prove correct, Nigeria, Congo, Tanzania, Ethiopia, and Niger will be among the most populous countries in the world by 2100. 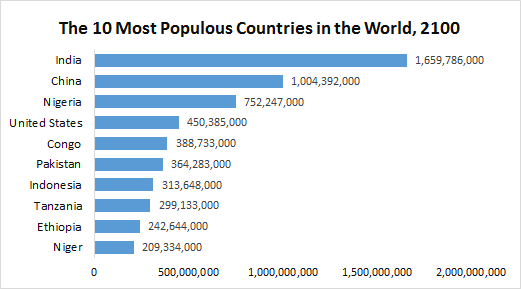 Embed this graphic:   The interactive graphic at the top of the post is fully responsive and can be embedded using the code above (thanks to NPR’s pym.js plugin). Here is the map as an animated gif.