As discussed in a previous post, by 2100, the world’s population is projected to balloon to 11 billion. Looked at in isolation, that number seems astoundingly high.

Does the earth have enough room to accommodate so many people?

Judging by this map, the answer is a clear yes. While overpopulation may be a localized problem in some of the densely population areas of Asia (see population maps of Bangladesh/India and Tokyo), the vast majority of the world’s land area is actually very sparsely populated.

In terms of area, the black region covers 99% of the Earth’s land. Particularly in Africa, where nearly all of the population growth is expected to occur, there is an abundance of open space for more people to live.

Nearly all of the world’s population growth by 2100 will occur in Africa. By that time, the populations of Asia, Europe, and the Americas will be flat or shrinking.

Not all of the details are visible in the map at the top. If you’d like to take a closer look, you can download a high resolution version from here.

Below are the zoomed-in views of a few select areas. 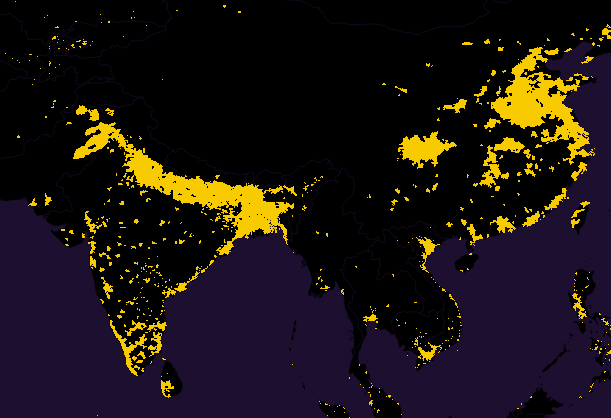 The bulk of the yellow region is clearly located in India, Bangladesh, and China.

Nearly half (46%) of the world’s population lives within just the area shown in this image.

And unlike the rest of the world, much of the population is concentrated deeply inland. The Chengdu / Chengking region, the large yellow blob in the center of China, is about the same size as the state of New York. There is a good chance you’ve never even heard of these cities, yet the area is home to over 100 million people.

The island of Java in Indonesia, shown on the left, is also about the same size as New York State. It has a population of 140 million, making it the most populous island in the world.

Number 2 on the list of most populous islands is Japan. It contains not only the largest metro area in the world, Tokyo with 37 million inhabitants, but also the world’s seventh largest, Osaka, which has a population of 20 million. 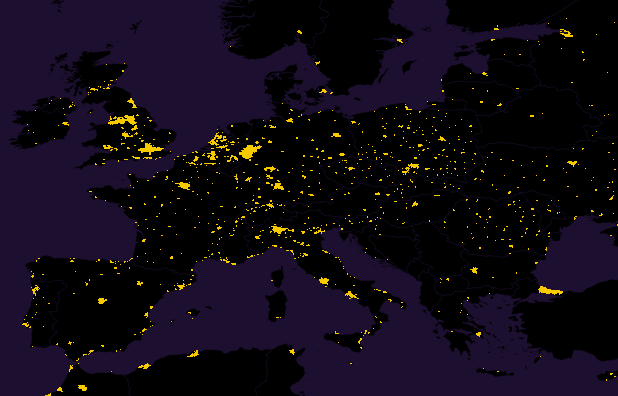 Though it does not have nearly the population density of Asia, Europe is exceptional for its lack of open space. Unlike the heavily concentrated population centers of Asia, Europe’s dense areas are spread out remarkably evenly across the continent.

Though it may not be surprising, the north of Africa is largely devoid of dense population zones, with one major exception.

As explained above, this map was constructed based on a world population grid made up millions of tiny cells, each one measuring about 3 miles x 3 miles. In all the world, the cell with the largest population is located in Cairo. The area, which measures only 9 square miles, is home to over a million people.